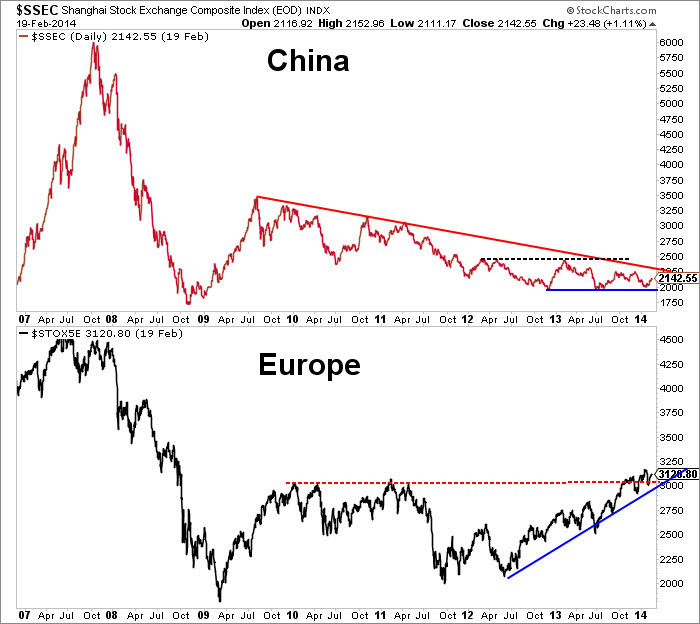 Rotations come and they go, typically lasting between six and nine months. Rotation is to stocks what location is to real estate. You have to be aware that diversified investment managers are always looking at their portfolio weightings to increase their position in sectors and industry groups that are outperforming the market and decreasing their weightings in positions that are underperforming. This is how the active manager seeks alpha. Traders will never want to be in underperforming areas and will seek out returns where they can best be found. So, rotations come and go, and we can clearly see over the past month that a rotation is occurring in commodities.

The last rotation I talked about was in May of last year, when I wrote, “Industrials and the Return of Alpha”. At that point, I talked about the rotation out of non-cyclical stocks and into cyclical stocks. After a brief lull, leading economic indicators were turning back up again at that time. Stocks were discounting this improvement, and in the second half of 2013, we saw some of the best GDP increases for this country since 2011. Cyclical stocks are still working, especially late-stage cyclical stocks now in energy and materials.

Before talking about the commodity rotation, a little history lesson on the top in commodities so that you, the reader, can understand the relationships that drive commodity prices, because everything is interrelated – currencies are related to economic growth and monetary policy, which influence supply and demand of imports and exports, which, in turn, drive commodity prices.

Commodities have been hated, under-loved, and under-owned over the past couple of years. Ever since Chinese stocks topped in April of 2011, the CRB index (a commodity index) topped and so began a two-year correction. At that point in time, the U.S. dollar staged a major reversal in trend due to the end of  the Federal Reserve bank’s second purchase program involving Treasuries, as well as instability in the European financial markets. The European Sovereign Debt Crisis drove investments back into the U.S. financial markets, supporting a rise in the dollar. So, the top in commodities didn’t just correspond to a top in Chinese stocks, but also the end of QE 2.0 in June of that year. Precious metals, energy stocks, and other commodities were bought before QE 2 was announced in 2010 to play the reflation trade – and it was a trade that was faded just before QE2 ended.

That’s enough of the history lesson. The importance of the history of the top in commodities is the catalysts of monetary policy and a foreign financial crisis that drove our currency higher. Additionally, the peak in Chinese economic expansion was being discounted in Chinese stocks. As China was and is a major buyer of commodities, this affected demand and price of commodities.

There is a rotation happening now, as I mentioned last week, wherein gold and many commodities are staging a relief rally. The possibility of a long-term bottom is high because many have broken long-term downtrends. Sentiment is changing, as I showed in the Commitment of Traders report for gold futures and options contracts. This is also the case for natural gas, oil, coffee, cotton, and more. Hogs and cattle are already in uptrends when large traders started increasing their position last summer. Here are some charts that show the price charts and the net position from the Commitment of Traders report over the last few years. Note the significant change in the last two months for large traders’ net options and futures positions on softs, metals, grains, and energy. Is there a fundamental backdrop to an increase in commodity prices? The dollar hasn’t started a new downtrend. In fact, it’s trading in a range with no clear direction right now between 80 and 81.50 on the dollar index (not trade-weighted). The direction of the dollar depends a lot on the euro as well as the yen. The dollar fell in the third quarter last year as the euro rallied. In truth, the dollar has been trading within a range for 5 years. Before that, it was in a downtrend from 2002 to 2008, corresponding to the biggest bullish run in gold and other commodities since the 1970s.

We got the Federal Reserve Minutes for the January meeting yesterday. In the minutes, did the Fed appear to want to ease more? Is there going to be a new plan to increase inflation up to the 2% target? No. Rather, there was a heated debate on whether “it might be appropriate to increase the federal funds rate relatively soon.” In addition, it was probably the Fed hawks that indicated it would be appropriate to raise rates “before the middle of the year”. One could argue that near 0% interest rates, any rise would be “removal of accommodation” back towards the average Fed Funds rate level; but, technically, it is tightening policy to raise rates.

In addition, the Fed showed no inclination to delay the tapering of purchases despite recent weather-related weakness in the economy. The vote to taper in January was unanimous. I agree that the fed’s taper program isn’t “tightening”. It’s a removal of accommodation and return to “normal” monetary policy tools that focuses on forward guidance and the Fed Funds rate (which influences short-term rates); however, the Fed is still increasing its balance sheet every month, and, technically, that is easing.

All of this is just posturing by the Fed to manage the markets. It is important to understand policy, as it really does affect currencies, liquidity, and credit, all of which commodity traders watch to make bullish or bearish bets. As I showed above, commodities are undergoing a sentiment change as large investment managers and hedge funds increase their net position in commodities by increasing their long exposure or decreasing their short exposure. It’s clear on the charts that this is having a positive effect. Some, like myself, will call it a trade. Whether it becomes a long-term trend, we’ll have to look to commodity demand. Obviously, the winter is affecting crops, and so we see prices rising in softs and grains. Cattle and hogs have been on the rise since mid-last year. Possibly on the wealth-effect, but these animals need to be fed, too. If corn prices go up because of ethanol use or crops freezing, meat prices will follow. Eventually, weather changes, and is never a long-term catalyst. So, watch commodities like you would a speculative trade; however, the charts have put in what looks to be the recipe for a long-term bottom, which we didn’t see last year.

Looking at other asset classes, oil broke out above $100/barrel this week. Technically, crude has completed a double-bottom with a price objective near $107.50 and resistance near last year’s high around $110. Oil stocks are breaking out of 2-year long consolidations like service companies: Nabors Industries (NBR), Basic Energy Services (BAS), and Baker Hughes (BHI), as well as in natural gas and oil producers like Southwestern Energy (SWN), Ultra Petroleum (UPL), Canadian Natural Resources (CNQ), and many more. Many of the material companies are also showing long-term bottom conditions. I’ve even started looking at coal companies again for the first time in two years, but I still think they have more time to go.

Chemical companies, aluminum companies, steel, cement, precious metals, and diversified mining stocks are all beginning to look interesting again. These companies do well when the market believes the market cycle and economic cycle are in full recovery mode. As consumer discretionary and industrials performed last year, the next to perform are typically materials and energy. So there you have it: rotation comes and it goes. Right now, it’s clear that a rotation is happening. Just when I thought it was a done-deal that financials would be the best performers with a widening yield curve, a winter season comes and slows down economic activity, putting pressure on long-term yields. So, this trade has been put on hold, and a relief rally has begun in commodities. Watch for the rotation and don’t be caught unawares!