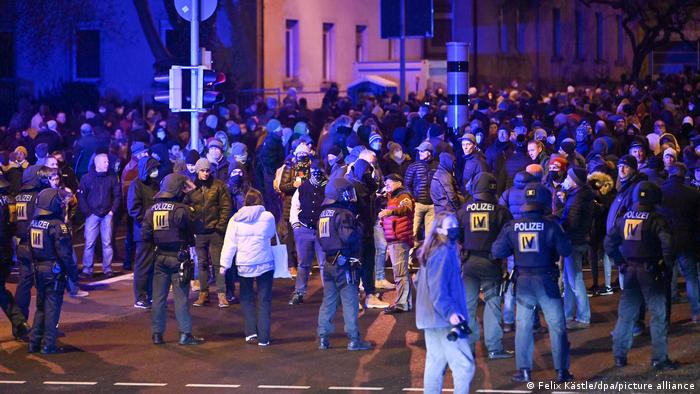 Towns across eastern Germany saw the largest turnouts in protests against a planned vaccine mandate and new restrictions. At least 10 police officers have reportedly been injured in riots in Saxony.

Thousands of people demonstrated on Monday against coronavirus restrictions in Germany.

The protests came in response to new restrictions on private gatherings and a ban on spectators at public events ahead of New Year celebrations. The German parliament also approved a vaccine mandate for medical staff earlier this month.

In recent weeks, demonstrations against COVID measures have flared up across Germany — and often turned violent, with police officers injured and protesters arrested.

Eastern states see most protests
Police in the northeastern state of Mecklenburg-Western Pomerania reported that a total of 15,000 protesters took to the streets in various towns.

According to police in Mecklenburg-Western Pomerania, around nine criminal charges involving resisting arrest, inflicting bodily harm, damage to property and the use of symbols of unconstitutional and terrorist organizations were handed out to protesters…read more.