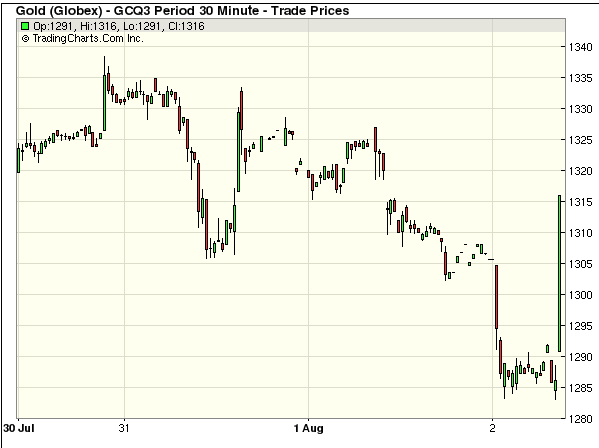 Gold Chart Screenshot Above taken at 6:05 am PST

The sell off in gold has run its course, and the precious metal is set on an upward trajectory thinks Dennis Gartman. Gartman is a closely followed commodities trader and founder of The Gartman Letter.

The low that gold prices hit a month ago will stand as the bottom for “a fairly long period of time,” Gartman told CNBC on Friday (July 26th).

“I had been agnostic and modestly bearish of gold until about three and a half weeks ago,”  “Then I wrote what I call ‘a watershed commentary’ that gold was going to go several hundred dollars higher.”

“Dennis Gartman insists that there are no conspiracies in gold

Wednesday’s “Talking Numbers” program by CNBC and Yahoo Finance concocted a silly pillow fight between two talking heads, commodity letter writer Dennis Gartman and UBS and CNBC analyst Art Cashin, over “gold conspiracy theories,” Cashin having remarked this week, if a bit incoherently, that something seems to be wrong in the gold market.

Gartman disagreed today, insisting that there are no conspiracies in gold. So apparently Gartman would have investors believe, just for starters:

1) The Federal Reserve has no secret gold swap arrangements with foreign banks, since such undertakings among two or more entities would define conspiracy, and Fed Governor Kevin M. Warsh was lying when he admitted such secret arrangements.

2) The Bank for International Settlements is not constantly and secretly trading gold, gold futures, gold options, and other gold-related derivatives on behalf of its members, which are exclusively central banks — again, action undertaken secretly in concert by two or more entities, or conspiracy — and that admissions of such trading, including the BIS’ own annual reports and Power Point presentations, are lies or forgeries.”