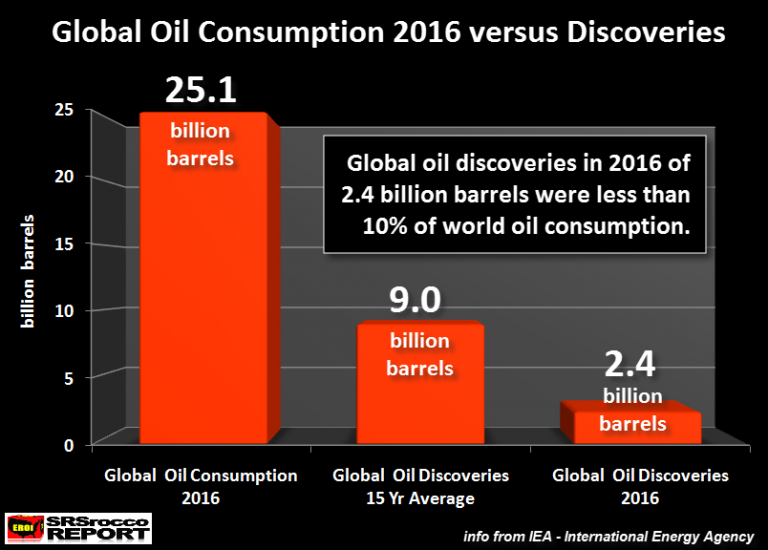 Future global economic growth is in serious trouble as oil discoveries fell to historic lows last year.  The International Energy Agency (IEA) reported that the sharp downturn in capital spending by the conventional oil sector was due to extremely low oil prices.

According to the IEA report:

Oil discoveries declined to 2.4 billion barrels in 2016, compared with an average of 9 billion barrels per year over the past 15 years. Meanwhile, the volume of conventional resources sanctioned for development last year fell to 4.7 billion barrels, 30% lower than the previous year as the number of projects that received a final investment decision dropped to the lowest level since the 1940s.

By taking the IEA’s oil discovery data and comparing it to the total amount of conventional oil consumed by the world in 2016, here is the following chart: To understand the breakdown in the different oil types, the IEA provided the following data:

Conventional oil production of 69 mb/d represents by far the largest share of global oil output of 85 mb/d. In addition, 6.5 mb/d come from liquids production from the US shale plays, and the rest is made up of other natural gas liquids and unconventional oil sources such as oil sands and heavy oil.

Now, what is even more alarming, is that global oil discoveries have been much lower than production for quite some time.  The IEA also stated that the amount of world conventional oil discoveries averaged about 9 billion barrels for the past 15 years.  If we assume that the world was producing 65 mbd of “conventional oil” for the past 15 years (it was likely higher), the world was only replacing about 38% of its annual oil consumption.

Here are the oil figures:

So, not only did the world only discover 10% of the conventional oil it consumed last year, it has only been replacing a little more than a third of what it has been consuming for in the past 15 years.  This is extremely bad news and it is starting to catch up to us.

I will be writing more energy articles showing how the situation is becoming more dire for the U.S. and global oil industries.  I am waiting for the top U.S. oil companies to release their detailed SEC quarterly results in a week to provide more information, but they have already released some results.

For example, ExxonMobil cut its capital expenditures another 19% during Q1 2017 versus the same period last year.  Falling exploration and capital expenditures will grind to a halt future oil discoveries.  Investors need to understand that this will impact global economic growth quite negatively in the future.