“Fundamentals” in a Financial Mania 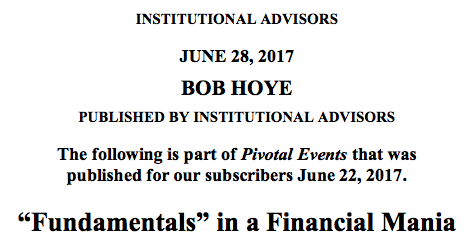 Within context, Blankfein’s comments were upbeat on the economy, not pointing out the risk.

Computer programs designed by quants are telling quants to be fully invested.

The yield curve in China is extending the inversion trend to a record. Reversal will signal speculation has exhausted itself.

The irony with the Argentina “100s” is the observation that there has been no twenty- year span in the country’s history when it did not default.

The key technical requirement is to have the “Hindenburg” signal of June 6th confirmed by another such signal within 36 days. This registered yesterday.

The rule on this one, is that each such signal is not necessarily followed by a collapse of speculation, but there has been no such collapse without a confirmed Hindenburg. The last “confirmed” occurred in July 2015. Prior to that it was in October and June 2007, a fateful year.

Of course, it is essential that market forces have become highly speculative. This, we have been noting.

The probability of a cyclical stock market peak being completed at around June was reviewed in our Checklist for a Top of June 6th. This noted that the market was up when it should be and that speculation was measurably evident.

This time around, central bankers have become belligerently reckless, which has introduced additional risk, without precedent. The key thing is that orthodoxy considers that there is no risk.

Our approach has been to review the history of financial markets and the “fundamentals” of excessive speculation become very evident. Such excesses are measurable. This approach worked very well for us in 2007 and in 2008. 1

Another “fundamental” of a financial mania has been the reversal in credit markets from party to contraction. The party mode has driven the China yield curve to inverted. In the US, flattening is moving quickly. On data back to the 1850s, the curve need not invert to precede a contraction. All it needs to do is reverse.

Pivot’s point is to examine market forces for the probability of cyclical change. Rather than simple extrapolation, this involves three stages. In this case, the first is the “Up”, which earlier in the year we noted as to “around June”. This, at the risk of being repetitive, requires “ending action” which is the second stage. Stage three is the formal reversal.

Quite likely, the confirmed Hindenburg is an important part of Stage Two.

A change in credit markets would also be part of Stage Two.