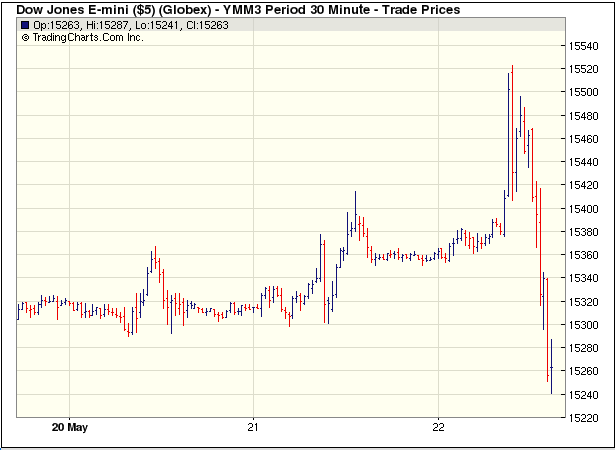 A rally on Wall Street evaporated Wednesday as investors wrestled with mixed messages from the Federal Reserve.

After yesterday’s Broad Blunt Hints from  St. Louis Fed President James Bullard and New York Fed President William Dudley. who both essentially said the Fed was going to keep fueling Asset Bubbles by keeping interest rates a breath away from zero by continuing with its present bond-buying program.

Bernanke confirms that stance late this morning PST by stating “A premature tightening of monetary policy could lead interest rates to rise temporarily, but would also carry a substantial risk of slowing or ending the economic recovery and causing inflation to fall further,”

Bernanke also stated that after keeping its key short-term interest rate near zero since December 2008, he expects it to stay there for a “considerable time” as the recovery strengthens, Bernanke said.

The Dow had surged more than 150 points earlier in the day as investors welcomed comments from Fed chairman Ben Bernanke, who told lawmakers that withdrawing monetary stimulus prematurely could derail the economic recovery.

….the momentum faded after the Fed released minutes from its latest policy meeting, which ended May 1.

The minutes said some members of the monetary policy committee were willing to dial down the Fed’s bond-buying program as soon as June if the economic recovery becomes sustainable. Some good analysis of those minutes by John Hilsenrath:

Federal Reserve minutes from its April 30-May 1 policy meeting suggested it is heading toward some difficult debates on when to pull back its bond buying program.

Below are key passages in the minutes and how to read them:

1) “A number of participants expressed willingness to adjust the flow of purchases downward as early as the June meeting if the economic information received by that time showed evidence of sufficiently strong and sustained growth; however, views differed about what evidence would be necessary and the likelihood of that outcome.”

WHAT IT MEANS: The Fed will debate at its June 18-19 meeting whether to reduce its $85-billion per month bond-buying program, but officials don’t appear near a consensus on the matter. Fed chairman Ben Bernanke suggested in testimony to Congress earlier in the day that he wanted to avoid moving prematurely toward pulling back.

2) “Several participants pointed to the improvement in interest-sensitive sectors, such as consumer durables and housing, over the recent period as evidence that the purchases were having positive results for the economy.”

WHAT IT MEANS: The Fed talks about the costs and benefits of its policies. So far, they think the bond buying program is still helping the economy.

3) “Economic data releases over the intermeeting period were mixed, raising some concern that the recovery might be slowing after a solid start earlier this year, thereby repeating the pattern observed in recent years. Various views on this prospect were offered, from those participants who put more emphasis on the underlying momentum of the economy, noting the strengthening in private domestic final demand, to those who stressed the growing fiscal restraint or the other headwinds still facing the economy.”

WHAT IT MEANS: Fed officials are hesitant about their next step on monetary policy in part because they’re especially uncertain about how the economy unfolds in the next few months, in the face of tighter fiscal policies.

4) “Both headline and core PCE inflation in the first quarter came in below the Committee’s longer-run goal of 2 percent, but these recent lower readings appeared to be due, in part, to temporary factors; other measures of inflation as well as inflation expectations had remained more stable. Accordingly, participants generally continued to expect that inflation would move closer to the 2 percent objective over the medium run.”

WHAT IT MEANS: The Fed’s favored inflation measures have dropped well below its 2% target, but officials aren’t deeply concerned about it yet.