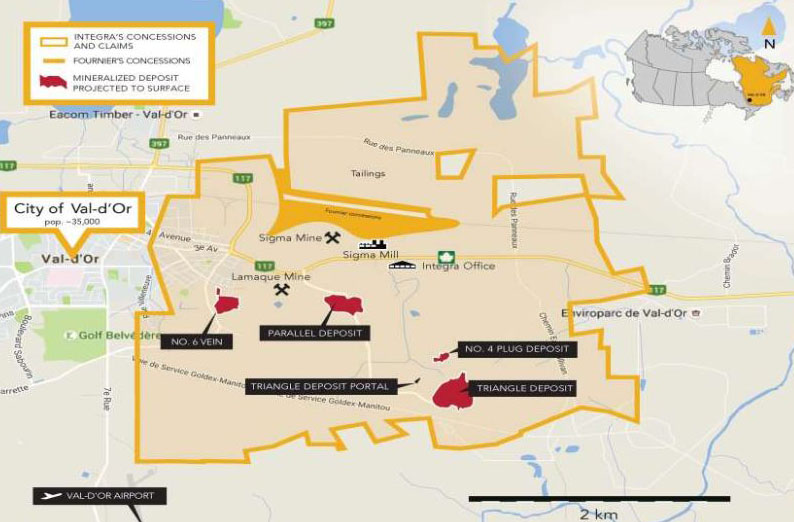 The bear market was tough. Lots of companies went into complete hibernation; lots of people left the sector. It takes time for companies to get going again, but they have begun to get back on their feet, says Gwen Preston, founder of Resource Maven. She discusses some of the major trends she sees in the mining industry, and profiles several companies that survived the lean years and could lead the pack going forward. Majors Are on the Hunt
Majors, after selling almost everything to survive the bear market, need to start restocking the pipeline again. Usually that process starts with new production and near-development stories, but there just aren’t very many such assets around. The bear market derailed so many projects that only a small number are ready to be built or are newly operational. Majors are circling these opportunities but, because they know competition will be stiff, they are also going straight to exploration-stage opportunities.

However, don’t expect a wave of M&A. Instead, I think we are going to see a wave of partnerships—joint ventures and equity investments that give the major a foot in the door with assets they like. And while such deals aren’t as exciting for the market as takeouts, they are important because they make it possible for juniors to advance their projects quickly and to focus on exploration instead of where and how to find capital.

Optionality Offers Leverage, but Little More
Optionality plays have done very well in gold’s run to date. Investors have piled into the idea of leveraging gold via a portfolio of projects with significant ounces in the ground. That leverage will remain. And leverage to a rising price is win enough for many. However, if a win for you means a takeout or a construction decision, optionality isn’t the right game.

This time around, majors are not interested in size. They want value. Goldcorp did not buy Kaminak because a mine at Coffee would impact its production profile significantly; it bought it because Coffee will be an economically robust mine that will help Goldcorp’s bottom line.

Value accretive assets are the name of today’s game. That means things like infrastructure, metallurgy, social license, design complexity, and costs really matter. Large deposits with challenges in these areas are not of interest. They may yet come back into vogue, but if they do it will not be for a while. Majors destroyed so much capital buying for size without focusing on practical value in the last cycle that the focus on value accretive assets will stick around for quite a while.

Juniors Are Gaining Confidence
Juniors are gaining confidence that capital is available. It has taken time for that confidence to establish, which is why so many juniors initially planned only small drill programs this year–they were still in full capital conservation mode. Now they see oversubscribed financings left and right, backing everything from advanced assets to grassroots exploration and from the revival of old projects to new discoveries.

The confidence means drill programs are being expanded, new targets are being tested, and new partnerships or acquisitions are being inked. Most moves are still small relative to the exploration programs or deals we see when things are hot, but they are a heck of a lot bigger than they were six months ago, let alone a year ago.

Those Active Now Will Win Later
The bear market was tough. Lots of companies went into complete hibernation; lots of people left the sector. It takes time for companies to get going again from standstill and for people to insert themselves back into the sector. That’s OK; it’s part of the process. But the companies and people who stayed alive through it are leading the pack today.

Companies that stayed alive are reaping the rewards of their bear market efforts. The efforts were often directed at tasks that could be accomplished, like advancing engineering or metallurgy or permitting or social license. Not sexy stuff—but when the market is so turned off that stocks fall on hot drill results, it makes sense to focus on the boring.

Below are a few of the companies that can benefit from these trends.

Integra Gold Corp. (ICG:TSX.V; ICGQF:OTCQX) is working toward the release of a prefeasibility study, but don’t be misled: this is a development-stage gold company. The adit that is being driven underground for exploration purposes for now is sized for production. The mill is almost ready to go; having a mill already built cuts the capital to turn this project into a mine probably in half.

Tight drilling is almost completed to upgrade the upper first-mined part of the deposit to reserve status. The brownfield nature of the property also means there is little permitting needed and the hoops that do need to be jumped through are straightforward and unlikely to cause problems. Plus, Lamaque is adjacent to the town of Val d’Or. This is Canadian mining central, a city named after gold and in need of a new major mine to provide employment.

Integra’s team has all the experience needed to start mining at Lamaque; it mixes together engineers and miners who have mined in the Val d’Or area for years with capital markets operators who can raise capital and tell the story.

Integra is one of few Canadian gold projects that could be taken to production this cycle, for a reasonable cost and with lots of exploration upside. Integra could do it alone or get taken out.

Also on the radar is Maritime Resources Corp. (MAE:TSX.V), which is closing in on upgrading from an exploration story to a development company. The prefeasibility study for the Hammertown gold mine in Newfoundland should be out within a few weeks.

Once Doug Fulcher and his team have that document in hand, they will start working to source capital to build the operation.

The build will not be expensive, as they are not building a mill—ore will be processed at the Nugget Pond mill 140 km away. Including milling and trucking costs, the operation should still generate a very nice return, perhaps as high as a 70% IRR.

The East Coast of Canada is attracting a lot of attention these days as a good gold district that is supportive of mine development. Maritime is well positioned in terms of its project, location, and stage.

The next company, TerraX Minerals Inc. (TXR:TSX.V), recently released assay results for the first four holes of its 27,000-metre drill program. The four holes tested Mispickel, which is the northernmost target in the 10km by 4km Target Area that is TerraX’s area of focus at the large Yellowknife City project. The Target Area covers a flexure of the regional Yellowknife shear zone; such flexures create the kinds of openings that can host gold.

Most of the targets TerraX has focused on to date lie along the west side of the Target Area, including Crestaurum, Barney, Brent-Hebert, and Shear 20. The work there has generated good results but, to ensure all significant targets saw initial testing before any one got the lion’s share of exploration attention, of late TerraX shifted to two targets on the east side, called Sam Otto and Mispickel.

The first holes into Mispickel last winter returned some nice hits. Those hits lined up, delineating a vertical shear zone of mineralization. Lower-grade hits also suggested the presence of mineralization in a hangingwall zone and a footwall zone.

So far Mispickel is showing good consistency of mineralization and structure. Two drills continue to test the zone. One is doing work like the holes just reported: testing known zones down dip and along strike. The other is drilling aggressive stepout holes along the interpreted trend. If both efforts return gold, Mispickel will have quickly shown itself to be a high-grade gold system with scale.

Our final company is in uranium, which is out of favor right now, but NexGen Energy Ltd. (NXE:TSX; NXGEF:OTCQX) has been busy laying the groundwork for the metal’s turnaround. The company’s Arrow deposit is one of the best mineral discoveries of the decade, regardless of commodity. Arrow is big, it is high grade, it is mineable, and it is in a good jurisdiction. Arrow will become a mine one day.

The uranium bear market continues. The spot price is near an 11-year low. This trend will reverse—the world will run into a uranium shortage in 2019 or 2020—but the turnaround clearly hasn’t started yet.

When it does, NexGen will rocket. It’s possible that Cameco will buy it before then. Either way, this stock will do well in the long run, and anyone who believes that a uranium bull market is in the cards should have exposure.

Until then, the stock will probably just hold ground. That’s somewhat crazy, given that NexGen announces incredibly high-grade drill results every month and is now showing that Arrow probably isn’t the only deposit on its property, but that’s what will be given the uranium sector and the fact that the next big thing for NexGen—an updated resource estimate—is not due out for almost half a year.

With almost a decade of junior resource-focused journalism under her belt, Gwen Preston launched Resource Maven. Preston watches the wires, talks to her network and analyzes economics to identify resource news that matters and figure out how to profit. She focuses on early-stage exploration and development stories. Preston has been interviewed on CBC and in the Financial Post.

Read what other experts are saying about:

Want to read more Gold Report articles like this? Sign up for our free e-newsletter, and you’ll learn when new articles have been published. To see recent articles and interviews with industry analysts and commentators, visit our Streetwise Interviewspage.