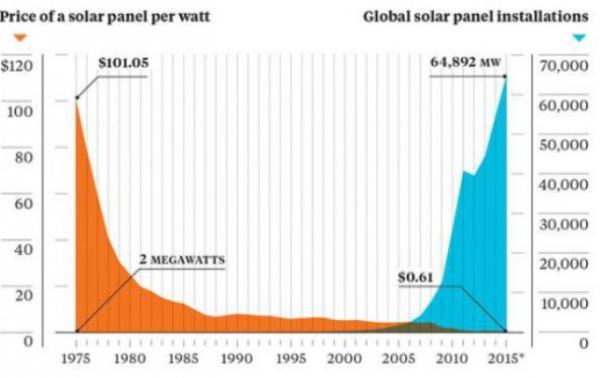 With all the oil-related headlines we’re exposed to each day, you might assume that “black gold,” along with other fossil fuels like coal and natural gas, matter to humanity’s future. You’d be wrong. Like Keynesian economics and fiat currencies, fossil fuels are near the end of their run. From here on out, solar is the story.

The following chart shows the decline in the cost of solar power and the resulting surge in solar installations through 2015. The relationship is clear: as prices plunge demand surges — in both cases exponentially. Pretty impressive, right? But nothing compared to what happened in 2016: And here’s one more chart showing how China — that insanely polluted coal burning urban dystopia — is leading the way on solar: This is shocking to people who A) are dependent on fossil fuels through work or investing or B) don’t understand the way exponential growth can change a market in an eye blink. So let’s hear from the father of exponential analysis, Google’s director of engineering Ray Kurzweil:

Ray Kurzweil: Here’s Why Solar Will Dominate Energy Within 12 Years

(Fortune) – Ray Kurzweil has made a bold prediction about the future of solar energy, saying in remarks at a recent medical technology conference that it could become the dominant force in energy production in a little over a decade. That may be tough to swallow, given that solar currently only supplies around 2% of global energy — but Kurzweil’s predictions have been overwhelmingly correct over the last two decades, so he’s worth listening to.

Kurzweil’s basic point, as reported by Solar Power World, was that while solar is still tiny, it has begun to reliably double its market share every two years — today’s 2% share is up from just 0.5% in 2012.

Many analysts extend growth linearly from that sort of pattern, concluding that we’ll see 0.5% annual growth in solar for the foreseeable future, reaching just 12% solar share in 20 years. But linear analysis ignores what Kurzweil calls the Law of Accelerating Returns — that as new technologies get smaller and cheaper, their growth becomes exponential.

So instead of looking at year over year growth in percentage terms, Kurzweil says we should look at the rate of growth—the fact that solar market share is doubling every two years. If the current 2% share doubles every two years, solar should have a 100% share of the market in 12 years.

Okay, technically, that would suggest solar would have a 128% share of the market in 12 years. Some might love that — but it highlights the fact that Kurzweil’s prediction is only partially grounded in the real world. Even 100% share is extremely unlikely — fossil fuel giants are definitely not going down without a fight.

But even those giants ignore Kurzweil at their own peril. He predicted the mobile Internet, cloud computing, and wearable tech nearly 20 years ago — all on the basis of the same principle of accelerating returns that’s behind his solar call.

If this sounds outrageously aggressive, consider what happened to Kodak, the dominant player in film photography for most of the 20th century. Early digital cameras were expensive and complicated and therefore not an obvious threat. But their prices plunged and film photography died. Here’s that process translated into Kodak’s share price:

Also recall that Nokia was once the dominant maker of cell phones. Then Apple introduced the iphone and phones that just made calls were pushed off the stage. This fate awaits most of today’s fossil fuel companies. The only question is when the death spiral begins.

Why is something like this appearing on a gloom-and-doom blog? Because one of the basic tenets of sound-money investing is that during periods in which society is destroying its fiat currencies, real assets will tend to outperform financial assets. So swap your government bonds (and certainly your bank stocks!) for farmland, well-chosen rental houses, gold, silver, and energy assets.

For the past century that last category was dominated by oil wells, coal mines and the stocks of the companies that owned them. But if the above trends continue – and it’s a near certainty that they will, given the torrent of advances in solar panels and batteries pouring out of labs around the world – then “energy assets” of the future will likely be solar and wind farms, advanced battery makers and the like. So the thesis remains the same while technology causes the names to change.