For Some Strange Reason … 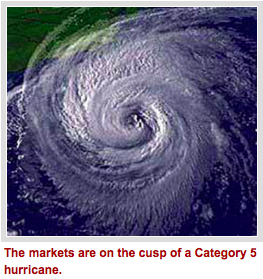 For some strange reason, most investors I talk to think the world is doing just fine. They say the U.S. economy is growing. They say Europe is not collapsing as so many experts have feared. That Canada is fine and that Australia, too, has a bright future. And that the Middle East and terrorism are to be expected, ever since 9/11.

And for most investors, China’s recent troubles are not surprising, nor should they harm the global economy.

Let me be perfectly clear: I totally disagree. The world is a mess, spiraling lower into what will prove to be the worst financial crisis and global depression since at least the 1930s.

I don’t say that lightly. Nor to scare you. I simply speak the truth. Nor am I a pessimist. For after we pass through this crisis over the next several years, I actually see a far better, brighter world and global economy than ever before.

But let’s open our eyes now, if they are not already, and take a look around the world at the major problems. There are oodles of them. Massive cultural rifts and splits developing between countries. Some due to the Syrian refugee crisis. Some due to old European conflicts brought back to the forefront due to the brain-dead euro experiment.

Capital controls now in place. Bail-ins now legal throughout the EU. Should a bank fail, you’re at risk of losing a major portion of your deposits.

Russia: Devastated by crashing oil prices and Western sanctions. GDP plunging 4.1% in the third quarter alone (latest available data). The Russian stock market down a whopping 32.6% just since last May. Down 65.5% since its 2011 peak.

China: Slowing, but still the brightest part of the world. Stock market panics scaring the pants off investors worldwide. The yuan, instead of strengthening as so many had expected, now sliding.

United States: Yes, brighter than all but China, but being propped up by capital inflows from abroad. Stock markets, fractured and vulnerable to collapse. Government bond market starting to implode. Deflation picking up steam. Unemployment figures, jerry-rigged. Real incomes, flat for nearly 15 years.

Total U.S. unfunded liabilities, not including any of the above: As much as another $200 trillion.

And all that is just surveying the obvious. For hidden beneath it all in at least three corners of the globe are broken governments, inept leaders, wasting decrepit bureaucracies, heavily socialist policies that will do nothing more than destroy modern civilization as we know it …

At least until the people of the world rise up, rebel and shout from the rooftops that they won’t take it anymore.

That time is coming and it will build in momentum over the next several years. You can see it right here in the U.S. where Donald Trump’s popularity is telling you — in no uncertain terms — that the American people are fed up with the status quo in Washington.

So what about the markets right now?
The worst start of a new year for the S&P 500 ever?

Take your pick. We are on the cusp of the back wall of a giant, Category 5 hurricane and it’s going to be with us for years.

In last week’s column, I gave you three sneak peaks at what lies ahead for this year.

The most exciting one is already starting to come into place: A rolling thunder of bottoms and new bull markets in commodities.

An area where more money will be made in the next few years than any other asset class out there.

P.S. We are on the cusp of the most profitable bull market of our lifetime. Stocks will be driven higher by powerful global undercurrents that Wall Street will either ignore or fail to understand. As the Dow doubles, some stocks will see explosive gains of 300%, 400%, 500% and more. Savvy investors who make the right moves will become very rich!

Click here for my free report and to find out how it could make you rich beyond your dreams.