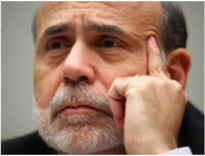 The Federal Reserve said on Wednesday the economy continues to recover but is still in need of support, offering no indication that it is planning to reduce its bond-buying stimulus at its next meeting in September.

The central bank said after a two-day meeting that it would keep buying $85 billion in mortgage and Treasury securities per month in its effort to strengthen an economy that it said was still challenged by federal budget-tightening. It also pointed to a recent run up in mortgage rates.

In a post-meeting statement, policymakers described economic activity as having expanded at a “modest” pace in the first half of the year. They had called the recovery “moderate” after their last meeting in June.

In another departure, the Fed’s policy-setting committee signaled some concern about the low level of inflation.

Amazingly, this month’s FOMC statement incorporates altogether six changes from the previous statement. Can we still call it a carbon copy? Yes, we can. We can, because that’s what it essentially is. Readers can see all the alterations at a glance via the WSJ’s handy ‘Fed statement tracker‘.

Still, with six words, respectively half-sentences changed, Kremlinologists will be very busy parsing this statement and attempting to extract its meaning. The main question will be: will they keep printing? It actually appears that the irrational ‘taper fears’ can now be laid to rest. We have maintained throughout the debate that the idea that the Fed would ‘tighten policy’ in any way, shape or form, was essentially a media hoax from the beginning. Most likely, the whole artificial debate was a ‘trial balloon’, to see how the markets would react. In addition, the Fed is always eager to maintain that its policy of rapid inflation is actually not inflationary, which is to say it attempts to ‘manage inflation expectations’. ‘Tapering’ and ‘exit’ talk are simply part of its propaganda arsenal to that effect.

We think Peter Schiff had it exactly right when he said that the mythical ‘exit’ is akin to doing the old table-cloth trick, but amounts to an attempt to pull out the whole table, not just the cloth, while hoping that the glasses and plates will continue to levitate on their own. The Fed won’t have much opportunity to practice to make sure that the magic trick will ‘work’.

So what is there to say about the changes in the statement?