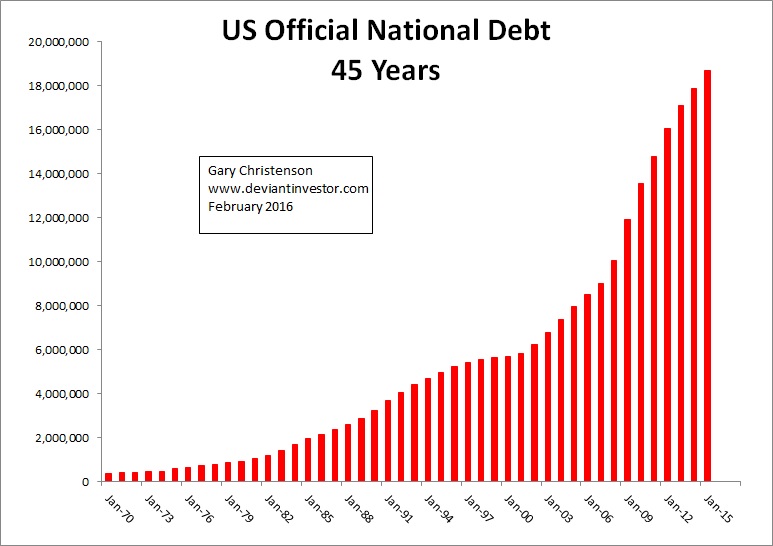 When central banks and politicians “manage” global currencies, we can expect:

It has happened before and it will happen again…

Japan has created a national debt that exceeds 1,000 Trillion yen, about 250% of their GDP.  According to the IMF, Japan’s debt is “unsustainable.”

Does anyone expect the debt will be repaid, reduced, or even stabilized?  I think it is clear that the debt will be rolled over and increased until it must be inflated away or defaulted.  This is political and central bank supported monetary madness.  Exponential increases inevitably end badly.

(The U.S. version of monetary madness.) (The Argentina version of monetary madness.)

Exponential debt increases appear normal in a central bank controlled financial world that benefits the political and financial elite at the expense of the middle and lower classes.  QE, ZIRP, and NIRP (negative interest rates) are recent examples of central bank responses to their self-created problems of debt based fiat currencies, exponential increases in debt, and uncontrolled deficit spending by governments.  Fiscal and monetary madness prevails!

Ambrose Evans-Pritchard on the DANGERS of negative interest rates:

“Huw Van Seenis, from Morgan Stanley, calls negative rates (NIRP) a “dangerous experiment” that undermines the mechanism of quantitative easing rather than enforcing it…”

“Narayana Kocherlakota, ex-head of the Minneapolis federal Reserve, reluctantly backs NIRP as deep as -3% but calls it a “gigantic fiscal policy failure” that central banks must resort to such absurdities.”

“Morgan Stanley said that once negative rates fall below 0.2%, the damage to bank earnings goes “exponential” and ultimately endangers the whole system of free banking in Europe that we take for granted.”

My comment:  The financial world is descending into an abyss of monetary madness as indicated by:

We have been warned!