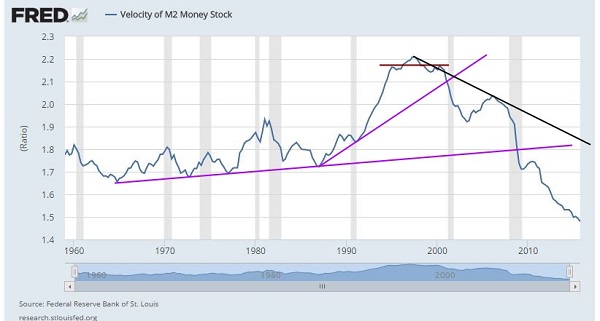 No great genius has ever existed without some touch of madness.
Aristotle

The simple and easy to understand chart shown below quite clearly illustrates why the Fed has no option but to lower interest rates.  Central bankers worldwide have already embraced negative rates, so it is just a matter of time before our central bankers are forced to walk down the same path.  The Fed is trying to put on a brave act, but you can already see them backtracking from the strong stance they took last year. Now they are stating that all is not well, and the economic outlook is weaker than expected. Rubbish we already stated in several articles that they would take this path and that the only reason they even raised interest rates was so that they could come out with an excuse to lower them again. The chart topped out in 2000 with a double top formation.  We did get a small pop up when Greenspan flooded the markets with money to create the housing bubble, but it put in a lower high. After that, it has been nothing but a downhill ride, and this is why Gold prices have tanked. The money supply has increased, but the money is not moving, the masses do not have access to this money yet.  This is why we stated that if they reallywant to create a monstrous bubble, they need to put this money into the hands of the masses. Only the masses are foolish enough to take markets to levels you can only envision after smoking some illegal substance.  This is why we are dead certain that the Fed will come out with another stimulus plan; this economic recovery is being held up by hot money and nothing else.

If the recovery were real, interest rates would not be held low for so long, and the Fed would need to support the stock market. After it stopped the corporate world stepped in via the illegal usage of Stock buybacks. Now instead of trying to improve the bottom line, they focus on simply buying back more shares and in doing so artificially boosting the EPS. It’s a perfect scam, no work and big pay; and as interest rates are low, the incentive to borrow large sums of money to do these dirty deeds is larger than ever.  Hence expect stock buybacks to surge to levels that will appear insane one day.

The negative rate wars have just begun, and it’s a matter of time before our central bankers take the same path. This ultra low rate environment created the perfect backdrop for speculation.  Individuals and corporations looking for better returns were forced to speculate.  However, the corporate world took things a step further; they went on share buyback binge, and this binge is not showing any signs of letting up.  It allows corporations to borrow money for next to nothing and then use these funds to buy backmassive amounts of shares and in doing boost the EPS (Earnings per share).   Negative interest rates will be akin to offering a crack addict, super crack; do you think he is going to refuse this offer? Negative rates will provide rocket fuel to the share buyback programs. Individuals should expect corporate debt to hit insane levels before a top is in; while today’s debt levels might appear insane, they will look sane in comparison to corporate debt in the near future.  Thus, all strong corrections should be viewed as buying opportunities.  From a mass psychology perspective, this is still the most hated bull market in history and until the masses embrace, it is destined to run a lot higher than most envision.

Lastly, we would suggest having a core position in Gold; at some point in time Gold will start to react strongly to this massive form of currency debasement. Currencies are being destroyed on a global basis at a level never seen before. This will not end well, but as we have pointed out many times before, being right does not equate to market success. One has to look at the time factor, and most individuals do not have the staying power to bet against the Fed. Wall Street is full of tombstones of good men who were right but could not stay solvent long enough to benefit from their insights.  Hence, we would not bet the house on Gold and nor should you. No matter how good an investment appears to be, one should never put all of one’s eggs in one basket.

And what is an authentic madman? It is a man who preferred to become mad, in the socially accepted sense of the word, rather than forfeit a certain superior idea of human honor. So society has strangled in its asylums all those it wanted to get rid of or protect itself from because they refused to become its accomplices in certain great nastinesses. For a madman is also a man whom society did not want to hear and whom it wanted to prevent from uttering certain intolerable truths.
Antonin Artaud