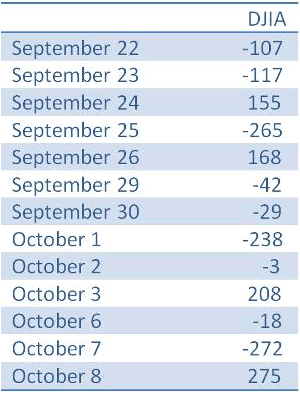 NEW YORK (MarketWatch) — The U.S. dollar turned lower against rivals Wednesday afternoon after the FOMC released minutes from its September meeting, revealing that members raised concerns that a one-two punch of a strong dollar and stagnant growth abroad could impede U.S. growth.

The closely followed central bank minutes also showed that several Fed officials wanted to remove language indicating that short-term interest rates would likely remain low “for a considerable time,” but held off in part because of concern that the market would misinterpret it as a policy shift.

Worries about tepid growth in Europe and Japan could relieve pressure on the Fed to raise rates sooner rather than later but already have been weighing on the greenback.

Check out the stock market’s volatility since the dollar has been rising. In normal times 200 point moves on the Dow are pretty notable. But they’ve happened in four of the past six sessions: One explanation for this surge in volatility is that the dollar is spiking at a time when stocks are priced for perfection, producing Fear (that an appreciating currency will price US exports out of world markets and make domestic debts harder to manage) to contend with the Greed generated by a long bull market.

The Fed understands the risk posed by a surging dollar and is using it as an excuse to do what it wants to do in any event: continue to hold interest rates at artificially low levels and keep the helicopter money flowing.

US equity markets loved this reprieve, of course. But now the question becomes: If too-strong currencies helped to push Europe and Japan back into recession, and weaker currencies (versus the dollar) were those economies’ main hope for avoiding an ugly deflationary crash, then what does the Fed’s desire to keep a lid on the dollar mean? The answer isn’t pretty. If the dollar goes down from here that’s the same thing as saying the yen and euro go up. And if those currencies rise, Japan and Europe are toast.

So this story has just begun, and the next chapter is likely to involve some seriously desperate/experimental actions from the European Central Bank and Bank of Japan.

DollarCollapse.com is managed by John Rubino, co-author, with GoldMoney’s James Turk, of The Money Bubble (DollarCollapse Press, 2014) and The Collapse of the Dollar and How to Profit From It (Doubleday, 2007)