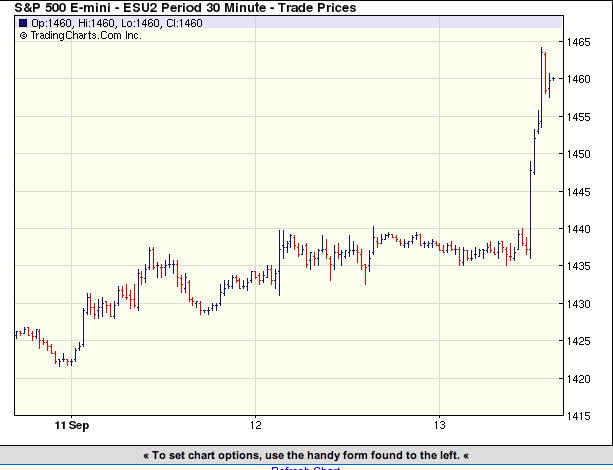 The Federal Reserve fulfilled expectations of more stimulus for the faltering economy, taking aim now at driving down mortgage rates until an improvement in unemployment that the central bank says will be a problem for several years.  Ben Bernanke recently spoke of the benefits of “non-traditional policies”

The US central bank has announced it will resume its policy of pumping more money into the economy via so-called quantitative easing. The Federal Reserve said it will “increase policy accommodation by purchasing additional agency mortgage-backed securities at a pace of $40bn per month”. Interest rates in the US have been close to zero for several years now.

The purchases will be open-ended, meaning that they will continue until the Fed is satisfied that economic conditions, primarily in unemployment, improve.

“The committee is concerned that, without further policy accommodation, economic growth might not be strong enough to generate sustained improvement in labour market conditions,” said the Fed, led by chairman Ben Bernanke

The stock market, which had been slightly positive prior to the decision surged while bond yields, particularly farther out on the curve, jumped higher. Gold and other metals gained at least 1 percent across the board while the dollar slid against most global currencies. (Ed Note: Gold chart taken at 12:58 PST) “There’s strong hints that they’ll do Treasurys next,” Joe LaVorgna, chief economist at Deutsche Bank Advisors, said in a phone interview from London. “They’re pulling out all the stops to try to get this economy to gain some traction and, most important, to get unemployment down.”  (Ed Note: It would seem that investors are thinking the Fed will act next on Treasurys as T-Notes rallied back to their pre-announcement levels. Chart taken at 1.06 pm PST) Federal Reserve to buy more debt to boost US Economy