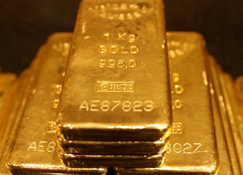 China is widely expected to overtake India as the world’s biggest consumer of gold this year with gold purchases rising by 10 per cent, according to the leading Chinese bank ICBC. Why?

The Chinese are moving out of the dollar and into gold. That is what a seemingly ill-educated gold trader in the Sharjah Gold Souk told us earlier this year.

King for a day

You don’t need to be a genius to see the logic behind this move. The dollar might be king today but only against the faltering euro. But what happens when we are reminded that US debts are running at levels comparable with Greece?

As the largest holder of foreign dollar reserves the Chinese are only too painfully aware of how exposed this leaves their savings in a slump. US treasuries are the biggest bubble in history as legendary investment adviser Dr Marc Faber reminded us recently (click here).

Diversification for protection really means something if you have most of your wealth tied up in US t-bonds. And where do you go for safety? Things have already gotten so bad for the Swiss franc that it has become pegged to the euro to stop further appreciation.

Then again if you are Indian and with your money in gold and not rupees then you are laughing. The massive depreciation of the rupee puts gold at a fresh all-time high in rupees, even while it is several hundred dollars off its dollar-denominated high of last September. This experience is not lost on the Chinese.

There are less and less safe haven assets in the world and more and more financial markets are manipulated by central banks because they have control over the supply of paper money. Gold and silver they can suppress through the collusion of the bullion banks but this will not withstand the pressure of massive demand for precious metals as the global economic system cracks up.

Imagine what the US economy would look like with the base rate set to Italian levels of six per cent. Asset values from bonds to stocks to real estate would be decimated. A deflationary depression would set in.

And yet nobody currently looks seriously at what is a very obvious future scenario as the artificial supports used to keep the world economy afloat since the global financial crisis begin to fail. The Chinese in buying gold and silver are just peering a bit further into the future and buying insurance against the worst case scenario.

The problem is that a seriously mishandled eurozone sovereign debt crisis may now make this the base case scenario. Oxford University educated financial journalist Peter Cooper found himself made redundant by Emap plc in London in the mid-1990s and decided to rebuild his career in Dubai as launch editor of the pioneering magazine Gulf Business. He returned briefly to London in 1999 to complete his first book, a history of the Bovis construction group.

Then in 2000 he went back to Dubai to become an Internet entrepreneur, just as the dot-com market crashed. But he stumbled across the opportunity to become a partner inwww.ameinfo.com, which later became the Middle East’s leading English language business news website.

Over the course of the next seven years he had a ringside seat as editor-in-chief writing about the remarkable transformation of Dubai into a global business and financial hub city. At the same time www.ameinfo.com prospered and was sold in 2006 to Emap plc for $27 million, completing the career circle back to where it began a decade earlier.

He remains a lively commentator and columnist as a freelance journalist based in Dubai and travels extensively each summer with his wife Svetlana. His financial blog www.arabianmoney.net is attracting increasing attention with its focus on investment in gold and silver as a means of prospering during a time of great consumer price inflation and asset price deflation.

Order my book online from this link