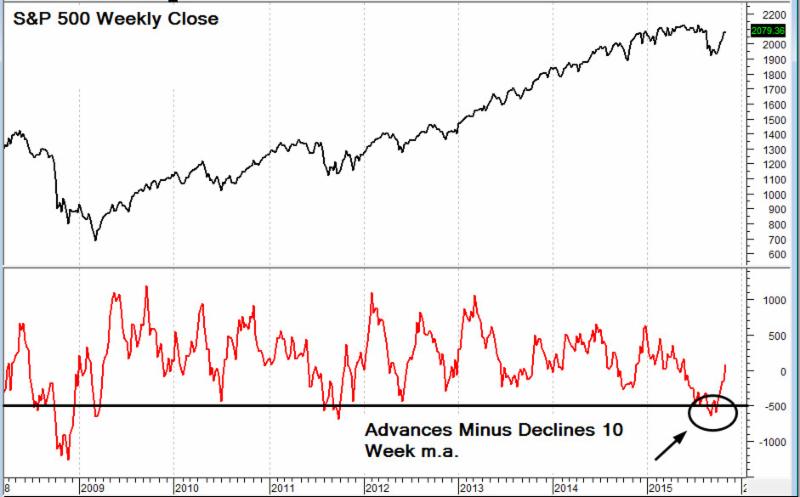 Before we get into seasonality, look at the chart below. I’ve seen a number of pundits scratch their heads wondering why the month of October was so strong. I mean, wasn’t the news very bad?
Well, we have a theory. Look how oversold the breadth indicator became (arrow). The 10 day moving average of weekly advances minus declines has only been lower than minus 500 a couple of times in the past 7 years and each time, a sustained uptrend wasn’t far off.
Now to seasonality.  In the 64 years since 1950, the period from October 31st, through April 30th has gained total of 17,433 Dow points. The remaining six months actually lost 1,066 Dow points.
What’s more, since 1983, the “good six months” has only been down 3 times in spite of enduring two of the most devastating bear markets in history. One of these was a 2.2% loss in the year 2000 and the other two were in 2007 and 2008, both very poor market periods.
This is good stuff. Let’s keep it to ourselves. Don’t tell anyone. SENTIMENT REMAINS CONSTRUCTIVE.
Another reason for the big October move is the weekly put call ratio. The 5 week moving average moved over 1.10 in the August-September period (arrow). Again. The last two times it did this, a sustained uptrend wasn’t far off.
Now combine the two charts with favorable seasonality and hopefully you can see why we remain constructive. GOLD
Gold is clearly in a downtrend on the daily charts which is why we’re currently bearish. However, it is just reaching into oversold territory (arrow), so let’s be vigilant in looking for a bottom. CANADIAN MARKETS
The Canadian markets are not acting as well as U.S. markets due to their natural resource makeup. But, like gold, the Toronto Exchange is moving into oversold territory. We’ve elected to remain bullish since our last buy on August 27. TRADING FOR OCTOBER
For the month, we gained 3.07 SSO points, at least that’s the total through Friday. We still have our last position on. Since early 2010, our hotline advice has gained over 70 SSO and SPY points. The SSO itself has gained 48 points during this period as it went from 18 to 66. This works out to be 167%. We can see the progress in the chart below. FINAL THOUGHTS
Some analysts are still saying that the market shouldn’t be going up because of earnings and the economy. To this we say nonsense. Earnings, in our opinion, have been discounted. This is probably the reason for the 10% decline in August-September.
Yes, the economy is worrisome, but frequently, there is very little correlation between the economy and the markets. Looking at the economy is worse than useless. It’s harmful. It will keep you out of stocks when you should be in. We do look at economic releases in our daily commentary, but only because it has a knee jerk effect of a day or two.
Times like this have a name. It’s called climbing a wall of worry and it has been a phenomenon for well over a century.
INTERMEDIATE TERM
Since 1993, we have given instructions to mutual fund investors to be either 100% invested or 100% on the sidelines. According to Timer Digest, of Greenwich, CT, which monitors over 100 advisory services world wide, we are only one of four
services to have beaten the buy and hold over the past ten years.
We were rated the # 1 stock market timer for the ten year period ending in 2003, 2004 and 2005. In 2006, we slipped to # 3. At the end of 2007 we were ranked # 4.
Since then, we have dropped out of the top ten for stocks, but we were bond timer of the year at the end of 2007 and 2008 which means we were ranked number 1 both years. We were rated # 1 in gold timing for 1997 and again in 2011. We were #2 in gold for the year 2014.
Stephen Todd
MANAGED ACCOUNTS
In association with Financial Growth Management, we can make available to you a low risk bond income program. Your account would be actively managed through TD Ameritrade or Trust Company of America.
Your funds will be exchanged between high-yield bond funds and money market funds based on a proprietary mathematical model. Our goal is to return 10-12% per year during a 3 to 5 year market cycle with very low risk.
If you would like more information, please contact Ray Hansen at 714 637 7784.