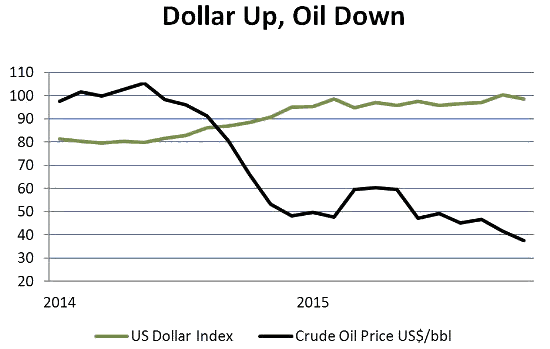 Oil is plunging again, this time in the wake of OPEC’s inability to limit its members’ production. The US dollar, meanwhile, is up on the divergence between Fed tightening and ECB/BoJ/BoC easing. This widening gap is a perfect storm for the many, many entities that have borrowed dollars to speculate in foreign currencies or drill for oil. Some examples:

(Bloomberg) – The commodity-price slump and the slowdown in China’s economy are crippling developing nations’ ability to borrow abroad, even as international debt sales from advanced nations remain at a five-year high.

Issuance by emerging-market borrowers slumped to a net $1.5 billion in the third quarter, a drop of 98 percent from the second quarter, according to the Bank for International Settlements. That was the biggest downtrend since the 2008 financial crisis and reduced global sales of securities by almost 80 percent, the BIS said in a report.

Emerging-market assets tumbled in the third quarter, led by the biggest plunge in commodity prices since 2008 and China’s surprise devaluation of the yuan. The average yield on developing-nation corporate bonds posted the biggest increase in four years, stocks lost a combined $4.2 trillion and a gauge of currencies slid 8.3 percent against the dollar. Sanctions on Russian entities and political turmoil in Brazil and Turkey also affected sales by companies in those countries.

Fears rise that junk bond investors are over their skis

(CNBC) – After years of safely reaching for yield through risky assets like stocks and speculative-grade bonds, Wall Street is heading into 2016 rethinking the strategy.

That trend of low defaults has begun to turn the other way, with the trailing 12-month rate rising to 2.8 percent in November, the highest level in three years, according to ratings agency S&P, which expects defaults to climb to 3.3 percent by Sept. 30, 2016.

Moreover, fellow ratings agency Moody’s reported its liquidity stress index in November hit its highest rate since February 2010. Still more troubling is that some of the damage has begun to spill outside the oil, gas and mining sectors, where most of the defaults had been contained.

Fully one-third of oil and gas and mining and metals companies in Moody’s coverage universe are on review for downgrade or have negative outlooks.

Brazil’s Unprecedented Torrent of Downgrades Is Set to Get Worse

(Bloomberg) – Amid Brazil’s economic and political tumult, the nation’s businesses have seen a record number of downgrades this year – and the total is about to get worse.

Fitch Ratings estimates it may slash the ratings of as many as 10 companies for every one it upgrades in 2016. Fitch said that grim scenario is most likely if it chops Brazil’s grade, an ever-growing possibility as the country’s woes deepen.

A top lawmaker initiated impeachment proceedings against President Dilma Rousseff last week, a move that may further undermine the nation’s finances and exacerbate the worst recession in a quarter century. That spells trouble for companies already finding it hard to obtain financing in the wake of an unprecedented corruption scandal at Brazil’s state oil company.

“You will see companies burning cash,” Fitch’s Carvalho said. “The cross-border market is closed for Brazilian companies, and the local market is selective.”

(CNBC) – If Saudi Arabia maintains oil production at current levels amid the oil price crash, then it’s going to have to cut its budget – or it will likely be bankrupt by the end of the decade. The big issue is Saudi Arabia’s big spending ways, especially increased government spending on social welfare programs.

According to the IMF, government expenditures in Saudi Arabia are expected to reach 50.4 percent of GDP in 2015, up from 40.8 percent in 2014. That increase can be attributed to two things: falling oil prices (it’s bringing in less revenue) and an inflated budget (it’s spending more money).

It’s no secret that a large portion of Saudi Arabia’s roughly 30 million people rely on the government for economic support. In February, the newly crowned King Salman doled out a reported $32 billion to the Saudi people in bonuses and subsidies to celebrate his ascension to the throne.

“We are a welfare society, so the population depends a lot on government subsidies, directly and indirectly,” Abdullah Al-Alami, a Saudi writer and economist, recently told The New York Times. “But one day we are going to run out of oil, and I don’t believe it is wise to be pampered and subsidized.”

To summarize, the world is entering a classic credit crunch, in which lending dries up for marginal borrowers first before tightening for core entities like multinational corporations and developed world governments. And it’s just beginning.

Most of today’s crises evolved with oil considerably higher and the dollar somewhat lower, so current conditions are actually a lot worse than those that, for instance, caused emerging market debt issuance to evaporate and shoved Brazil into existential crisis.

And since oil overproduction will likely to continue while the differences in central bank policies are etched in stone for the next few months at least, it’s possible that the performance gap between oil and the dollar will widen going forward. This will turbo-charge today’s crises and add a few more, as oil producing US states hit financial walls and big chunks of the developing world follow Brazil down the drain.