Faber: The Whole Shebang Could blow up….. 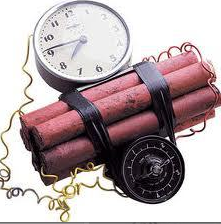 “The whole Financial System could blow up due to the huge amount of Derivatives still outstanding.”

“In my view, the European economy will not suddenly recover. It has too many structural problems. One way that the so-called “banking crisis” could be resolved, though, is to let inflation rates rise. Asset prices would then shoot up, and loan portfolios would be better covered. But I do not really think that inflation is the solution. The danger is that the whole financial system could blow up due to the huge amount of derivatives still outstanding. Once again, excessive speculation is being fueled by artificially low interest rates, and asset bubbles exist everywhere.”

“Basically, wev’e had since may 22nd, quite the sharp drop in markets around the world as in Turkey we are down 15% from the high. Japan also dropped from the recent high by 15%. in the u.s. many stocks have given up gains and they are no higher than in February. i think the market is rolling over. now very near-term we are a bit oversold and we may rally back to around 1660 on the s&p and 1670 and even on the back of the strength of Intel, Microsoft and IBM we could make a new high, but the new high would not be confirmed by the majority of shares so the market could be quite vulnerable.”