Bond Burglars to Bring Bears Out of Hibernation 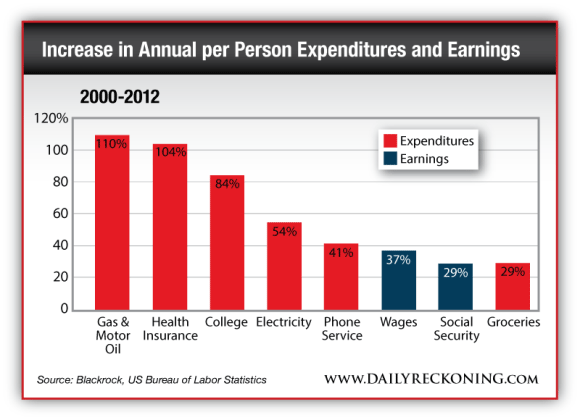 Although the Fed may realize (though I doubt it) that the current asset purchases have minimal impact on the real economy of the majority of American people, they probably think that continuous monetary stimulus is the lesser of two evils. This is a wrong assumption, in my opinion, because prices are rising far more than wages and salaries. Moreover, the Fed wants to stimulate credit growth with its artificially low interest rates. But again, credit growth has largely lost its impact on the real economy. The multiplier on GDP of an additional dollar of debt is now negligible. I suppose that the conclusion we can draw from it is that the larger the debt as a percentage of the economy becomes, the less will be the impact of an additional dollar of debt. I actually think that there is a tipping point where additional debt has a “contractionary” effect on the economy, because at this tipping point, the debt becomes so large that interest rates will increase no matter how much a central bank monetizes the debt. (Subsequently, inflation accelerates and the currency collapses, which leads, contrary to Mr. Bernanke’s view, to a general impoverishment of the population.)

But as I contended before, the probability that we have embarked on permanent asset purchases by the Fed is very high (until QE99 — or at least until the system breaks down, as just outlined).

Given my negative outlook for the global economy, I believe that 10-year Treasury note yields could decline once again to between 2.2-2.5%.

To Mr. Bernanke’s credit, and to be fair to him, I need to point out that his economic sophism is shared by most central bankers around the world. We can see that the global monetary base has exploded more than fourfold since 2003. These universally common monetary policies are, of course, applauded by fund managers, bankers and the investment community, all of which benefit (including myself) from rising asset prices. (Within 24 hours of the Fed’s announcement that there would be no “tapering,” the value of my assets increased by about 3%.)

But what is good for me as an asset holder doesn’t imply that it is the right monetary policy for the economy and for society as a whole. (Bill de Blasio’s policy of increasing taxes on high-income earners is a direct consequence of the growing wealth and income inequality brought about by expansionary monetary policies.)

For investors, the challenge is the following. Despite record buying of Treasuries and mortgage-backed securities, since September 2012, interest rates are up, not down. This proves clearly that the Fed is not all powerful.

Similarly, commodities and precious metals are still well below their peaks. The majority of stock markets around the world are well below their peaks, as are the majority of stocks in the U.S. In other words, it is not likely that the Fed and other central banks can boost further all asset prices, since this would require them to accelerate the expansion of the balance sheets ad infinitum.

Above, I mentioned that the Fed has lost control of the bond market. Now let us consider two extreme cases of monetary policies: The Fed announces an immediate stop of its asset purchases (policy A), or it announces an immediate increase in its asset purchases to $200 billion monthly (policy B). How would the bond market react to these announcements, and what would the subsequent performance be? I suspect that on the announcement of policy A, the bond market would sell off for a day or two.

But then the bond buyers would figure out that no asset purchases by the Fed would likely be somewhat deflationary and, therefore, beneficial for bonds. The announcement of policy B would likely lead to an immediate bounce in bond prices (though likely not a new high) and likely not to a new low in interest rates. In fact, I would assume that if the Fed’s and other central banks’ balance sheets were to expand forever at a rapid pace, the bond market would tank.

…even without tapering, there is a relative tightening of the turbocharged monetary expansion.

For what it’s worth, when yields on the 10-year U.S Treasury note rose toward 3% I bought some of the notes. Sentiment was extremely bearish (small traders were heavily short the bond market) and I thought that “tapering” (I expected $10-15 per month) would be favorable for the bond market. I was wrong in my assumption, but right about buying the notes, since they rallied subsequently. That’s the confusing world of investments we live in. Given my negative outlook for the global economy, I believe that 10-year Treasury note yields could decline once again to between 2.2-2.5%.

However, longer term, I remain bearish about bonds. Yet there is one point we need to consider. Is it wise to sell U.S. bonds of America? Its “Bank of America, Merrill Lynch (BofAML) private client flow data” shows a complete aversion to bonds and a strong appetite for equities.

According to BofAML’s chief investment strategist, in the week ended Sept. 11, 2013, private investors put $14.3 billion into equity mutual funds and withdrew $3.5 billion out of bonds. (It was the largest weekly move out of bonds in the last three years.) I am raising this question because, based on current U.S. stock valuations, the future returns will be relatively small.

According to Robert Shiller’s current P/E ratio, the five-year expected return will be 4% and the 10-year return just 1%. In the near term, I was also concerned that stocks had become extremely overbought following the strong rebound from their late August low, and that the current advance had not been confirmed by numerous technical indicators. From the Aug. 28 low at 1,627, the S&P 500 rose in a straight line to 1,729 on Sept. 29 (by 6.3% in three weeks, or by more than 100% when annualized).

As a reminder, the S&P 500 is also up 61% from its Oct. 7, 2011, low at 1,074 (two years). So I can understand why the phones are ringing at BofAML’s retail offices from clients who want to switch their funds out of bonds into equities. But this doesn’t imply that equities are a good value at present.

I want readers to perfectly understand that when I recently bought my Treasury notes yielding over 2.9%, I didn’t think they were of particularly good value either. But within my asset allocation of 25% of total assets in emerging market bonds and cash, I held a lot of dollar cash, which was in the banking system and yielding next to zero. So by moving some cash into 10-year Treasury notes, I gained some additional income and a higher level of security (at least for now) as compared with holding bank deposits.

I should also mention that according to Shiller’s current P/E ratio, the five-year expected return for emerging market equities will be 19% and the 10-year return 13.8%. I have to say that I consider these emerging market return expectations to be completely unrealistic. Given my negative outlook about the Chinese economy, which I have outlined in earlier reports, I think that emerging markets’ returns could be as low as zero (or even less) for the next few years.

As James Burgh, a British Whig politician who stood up for “free speech” (1714-75), observed: “In prosperity, prepare for a change; in adversity, hope for one.”

Faber: The Feds Next Move To $1 Trillion

Marc Faber, publisher of The Gloom, Boom & Doom Report, told CNBC on Monday that investors are asking the wrong question about when the Federal Reserve will taper its massive bond-buying program. They should be asking when the central bank will be increasing it, he argued.

“The question is not tapering. The question is at what point will they increase the asset purchases to say $150 [billion] , $200 [billion], a trillion dollars a month,” Faber said in a “ Squawk Box ” interview.

The Fed-which is currently buying $85 billion worth of bonds every month-will hold its October meeting next week to deliberate the future of its asset purchases known as quantitative easing .

Faber has been predicting so-called “QE infinity” because “every government programthat is introduced under urgency and as a temporary measure is always permanent.” He also said, “The Fed has boxed itself into a position where there is no exit strategy.”

The continuation of Fed bond-buying has helped support stocks, and the Dow Jones Industrial Average (Dow Jones Global Indexes: .DJI) and S&P 500 Index (^GSPC) are coming off two straight weeks of gains, highlighted by record highs for the S&P.

While there may be little inflation in the U.S., Faber said there’s been incredible asset inflation. “We are the bubble. We have a colossal asset bubble in the world [and] a leverage or a debt bubble.”

Back in April 2012, Faber said the world will face “massive wealth destruction” in which “well to-do people will lose up to 50 percent of their total wealth.”

In Monday’s “Squawk” appearance, he said that could still happen but possibly from higher levels because of the “asset bubble” caused by the Fed.

“One day this asset inflation will lead to a deflationary collapse one way or the other. We don’t know yet what will cause it,” he said.

More from Marc: Bond Burglars to Bring Bears Out of Hibernation