Faber: Roubini is outstanding economist but…. 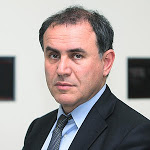 I know Nouriel Roubini very well. He is an outstanding economist. [But] I wouldn’t use him to giving me advice when to buy or sell shares or gold.

In 2009 when S&P was at 666 he[people like Nouriel] said the S&P would drop to 400. Since then the market is up 140%. You didn’t have to fight the fed until now. But in my view the global economy isnt growing much as evidenced by the sales report of Mc. Donalds, Caterpillar. The market has already discounted QE unlimited. Its never going to end. The impact of easing monetary easing is diminishing.

The danger is that the whole financial system could blow up due to the huge amount of derivatives still outstanding. Once again, excessive speculation is being fueled by artificially low interest rates, and asset bubbles exist everywhere.

.…read much more at Marc’s Blog HERE. Below are some of the other titles:

There has been a huge credit bubble in China, and it isn’t going to end well