Posted by Aki Ito via Bloomberg 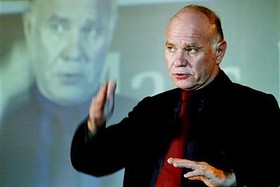 Given more than his normal 30-second soundbite on mainstream media, Marc Faber is able to discuss in considerably more detail his views on the massive growth in global financialization (when compared to real economies) noting that “one day, this financial bubble will have to adjust on the downside.” This will occur via either an inflationary burst or a collapse of the system. Simply put, “it’s gonna end one day,“either through war or financial collapse,” it will be very painful.” The Gloom, Boom, and Doom Report editor notes current asset valuations are driven by excess credit creation, printing money, and distorted market signals, and the unintended consequences of the effect on investor psychology are perfectly mis-timed. Faber concludes with a discussion of the inflationary impact of US monetary policy and where it is seen (and not seen) and the global social unrest implications of middle class discontent.

QE will not End with Ben Bernanke

Marc Faber:   I don’t think they[Fed] will end QE. I rather think they will have to increase it because as you print money or as you purchase assets, from a central banking point of view, it loses its impact over time. In order to keep the impact going, you have to essentially increase it. I believe that the Dovish members of the Fed will print more money. Especially after the resignation of Mr. Bernanke early next year, when he will be replaced, there will be even more Dovish members.

Money Printing will End only when The System Breaks Down Dr. Faber asked if money printing would end and when:

Yes, until the system breaks down. My view would be that there will be money printing, and the problem with money printing is always that you don’t control where it goes to. Ideally, it would go into higher incomes of the middle class and of the working class, but this hasn’t really happened. The real wait is for the typical household or the medium household, they are going down. What is going up is basically selected asset markets, like the real estate market has recovered. In some areas, we’ve hit new highs. The stock market has gone up. But as you know, only very few people own stocks in the United States, so it doesn’t impact the wealth of the majority of people.

Marc Faber: I dont know what the End Game will be

SMN: But do you think that will be worth anything?