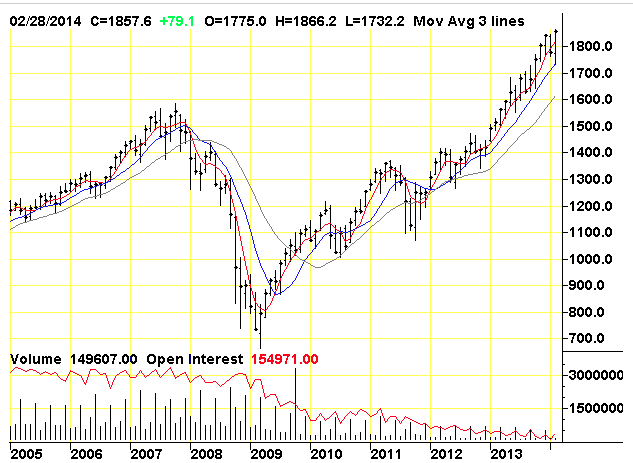 Take the 1987 stock market crash. By the summer of 1987, the stock market had become extremely overbought and a correction was due regardless of how bright the future looked. Between the August 1987 high and the October 1987 low, the Dow Jones declined by 41%. As we all know, the Dow rose for another 20 years, to reach a high of 14,198 in October of 2007.
These swings remind us that we can have huge corrections within longer term trends. The Asian Crisis of 1997-98 is also interesting because it occurred long after Asian macroeconomic fundamentals had begun to deteriorate. Not surprisingly, the eternally optimistic Asian analysts, fund managers, and strategists remained positive about the Asian markets right up until disaster struck in 1997.
But even to the most casual observer it should have been obvious that something wasn’t quite right. The Nikkei Index and the Taiwan stock market had peaked out in 1990 and thereafter trended down or sidewards, while most other stock markets in Asia topped out in 1994.
In fact, the Thailand SET Index was already down by 60% from its 1994 high when the Asian financial crisis sent the Thai Baht tumbling by 50% within a few months. That waked the perpetually over-confident bullish analyst and media crowd from their slumber of complacency.
I will make more Money by Buying now in the Emerging Economies than in the US

In a recent “Squawk Box” interview to CNBC, the publisher of “The Gloom, Boom & Doom Report” had cautioned investors that the long-running bull market in US stocks runs the risk of ending badly. “Usually these long bull markets, they end badly,” he said, pointing to the 1987 crash and the significant declines in 2000 and 2007. Speaking about EMs, he had then said that while it might be too early to buy some of the beaten-down emerging markets at these levels, investors can make money in the longer-term. “I think I can make the case that over the next five to 10 years, I will make more money by buying now in the emerging economies than in the US.”

“I think the market is way overdue for a 20 to 30 percent correction,” “nothing worries me… In fact, I’m hoping for the market to drop 40 percent so stocks will again become—from a value point of view—attractive.”
“But that is not the view of someone who is fully invested—obviously not.”

“I think the experience with quantitative easing is a complete failure. It has lifted asset prices and created asset inflation, but it hasn’t lifted the standard of living of most people in the U.S. nor worldwide.”
On the chance of a bounce (and what next?)

“If the rebound fails around 1,820 [on the S&P 500] and then the market starts to drift again on the downside, and we see important shares for the market such as General Motors, GE, MMM, Coke … failing to make new highs, then I think we can assume that something more serious is in the offing.” Marc Faber is an international investor known for his uncanny predictions of the stock market and futures markets around the world.Dr. Doom also trades currencies and commodity futures like Gold and Oil.