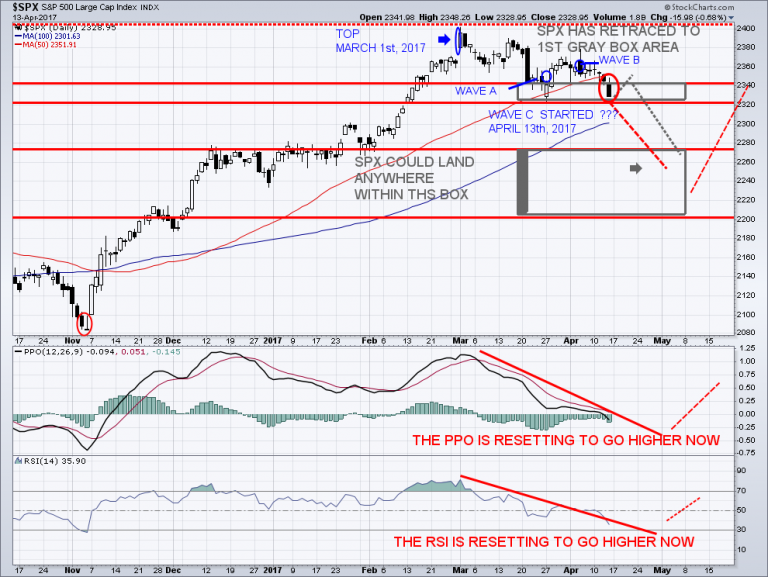 Thursday’s, April 13th, 2017, trading displayed some evidence of “exhaustive selling”. It is still trading well above its 200- simple moving day average. The BULLISH RALLY has not stopped.

In identical occurrences, based on historical data, the one-month returns, during which the SPX rallied 15 out of 16 times with a greater than 5-to-1 reward-to-risk ratio. “Emotional selloffs” occur in strong uptrends which have only presented themselves with greater buying opportunities.  This is the predominate case we are facing during this month of April.

Wave A is the first of three waves in the corrective phase. Corrections are almost always more difficult to identify than impulse waves and most investors confuse them as interim corrections. Volume might increase in Wave A and volatility will also rise, although not nearly enough to imply a bottom.

Wave C is often very impulsive and marks end of the current corrective phase. Volume may be higher in Wave C than in Wave A. Wave C is made up of five sub waves and terminates beyond the end of Wave A. Some studies suggest that Wave C should not continue beyond 1.618 times Wave A, but this is not a rule

The cart below shows the worst-case scenario based on current analysis. The low put in during the month of March could be in fact a bottom as there was a very small A-B-C correct pattern in March already. The momentum oscillators are now working themselves to the oversold levels.  The SPX is in the midst of its Corrective Wave ‘A-B-C’ that has further to go on the downside.

There is no desire to rally.  It appears that SPX is beginning its’ Wave C and it should see follow thru to the downside the next couple of weeks.  The bond markets and gold markets will continue to have a very short-term run up, trading with a negative correlation to stocks.

What is the ‘McClellan Oscillator’

The Mc Clellan Oscillator is the most revered market breadth indicator. It is primarily used for short term trading.  As one can see, when it closes under zero, the SPX starts its correction! For now, I am just taking it play by play, but I think this scenario will work out. It should most likely come at least very close to this big picture!

If you want to take advantage of my insight and expertise as I can help you to grow your trading account. Tune in every morning for my video analysis and market forecasts at TheGoldAndOilGuy.com on all ‘asset classes’ and new ETF trade opportunities.

The SPX was the latest index to end a long streak of momentum.  It closed below its 50-day moving average for the first time in more than 105 days. It also set a new all-time high during its parabolic move. Still, half of its 10 major sectors are still trading above their own moving averages. With momentum being this strong, it has historically led to above average returns 90 percentage of the times within three months. Any values that drops below 40%, are showing “excessive pessimism”. The current reading is below 30%, now displaying the extreme, and is suggesting that a market bounce is likely to come soon!

On the six-month chart, which is shown below, one can view the strength of the next SPX rally will be very strong and unexpected by most traders.  As I have mentioned in my recent market analysis, I believe the SPX is getting setup for a wonderful summer rally which will take it into the 2500 SPX range! On a short -term basis, we are at that point where sentiment is overly ‘pessimistic’. Seasonality is turning positive and any further selling should be erased by the time when everyone pays Uncle Sam. When short -term sentiment becomes pessimistic, it creates a new BUY SIGNAL to re-enter the SPX long!

The Pessimism is getting close to its’ Extreme Value reading to register a good bottoming indication for prices.  This fit well with my expectation from other indicators for a low this month.

Taking the impossible and making it possible!

As the stock market is in a corrective mode, breakouts and other reliable bullish patterns which every trader and his brother use have a greater risk of failing.

Momentum moves are significant, but normally short lived. My momentum strategy Momentum Reversal Method (MRM),  is an ideal swing trading opportunity for quick profits.  It captures short term 3-10 day “swings” in the market. This is the core benefit of my swing trading method, giving the trader the opportunity to obtain a short-term gain without long term risk exposure.

I currently have active trades which I anticipate will take off with the next market swing!

By sticking to my strict money management plan and being well prepared a trader has the opportunities to obtain great returns from short-term market movements.