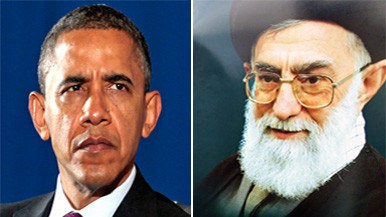 An open letter to President Obama was posted on an Iranian website (khodnevis.org) today from Dr. Mahmoud Moradkhani — the nephew of Iranian Supreme Leader Ayatollah Ali Khamenei.  This letter is explosive and tells Obama, in essence, that the ayatollah, his uncle, is lying in negotiations, practicing the Shia doctrine of taqiyya in which it is permissible for Muslims to lie to the infidel for the advancement of Islam.   He advises the president not to pursue his nuclear deal with Iran and to focus on the atrocious human rights record of that country.  But allow the doctor to speak for himself.

I am presenting this open letter as one of the serious opponents of the Islamic republic of Iran on behalf of the like-minded opposition groups and myself. Because of my knowledge of this regime, especially of Ali Khamenei who is my uncle (my mother’s brother), I see it as my duty to inform you about this regime and the issue of nuclear negotiations with the Islamic regime of Iran.

The tragedy of Cinema Rex*, believing in Khomeini’s words and then establishing a backward regime that is violent, medieval and against all international laws are all results of Iranian people and the world community being deceived. We are witnessing that not only a rich and cultured country like Iran has become a victim of this regime but also the Middle East and the whole free world. The intervention of Ali Khamenei’s regime (following Khomeini’s footsteps who had no other intention other that domination of Iraq) in Lebanon, Palestine, Afghanistan, Iraq, and Syria is more than obvious. As if these were not enough, he has now added the Arabian Peninsula to that list.

In any case, this regime has done great damage to Iranians and to the international community.

We can find a historical example of this kind of deception prior to the Second World War. Hitler manipulated and deceived German people and European countries and the hesitation in addressing the problem with Hitler led to a great disaster.

Due to the changes in time, the domain of the disaster might become limited now but breach of human rights is the same, regardless of the number of people who become victimized in the process.

Ali Khamenei and his collaborators know very well that they will never become a nuclear power. They certainly do not have the national interest of Iranian in their mind; they just use the nuclear issue to bully the countries in the region and export their revolution and middle-aged culture to other countries. Obviously, you and European countries do not give the Islamic regime any concession unless you are certain that they comply with the agreement. The Islamic regime of Iran will certainly prolong the verification period the same way that they have delayed and prolonged the nuclear talks. It is in this period that the wounded regime will retaliate with its destructive policies.

The countless breaches of human rights violations, spreading of Islamic fundamentalism, intervention and creating crisis in the Middle East are all unacceptable and contrary to democratic and humane beliefs of yours and ours.

While we can, with some measure of decisiveness and courage, uproot the wicked tree of the Islamic regime of Iran, just settling for cutting its branches is nothing more than avoiding responsibility.

The Islamic regime of Iran, based on their deceptive nature have sent their mercenaries abroad and even managed to recruit and manipulate some American-Iranians. Individuals who out of self-interest are lobbying for the Islamic regime of Iran and hiding its true nature and giving a false picture of its intentions; in the same manner that while Khomeini was in France, the so-called Iranian intellectuals did not let people of Iran and the world, realize the true meaning “the Islamic republic”. Those so-called intellectuals polished the remarks of Khomeini and converted them to positive, popular, strong and victorious ones.

I have a deep understanding and insight of the habits, morals and true indentions of this regime and I find it necessary to let you and the world know that the true evil of the Islamic regime of Iran is far more damaging and dangerous to be resolved by just signing an agreement.

People who have always lied, deceived and believe in Taqiya**, people whose main goal is supremacy and domination over others can never be trusted.

I believe that any agreement or concession that is not associated with these basic conditions in reality will only be assisting this regime in achieving its indecent goals.

The possible disaster following this kind of hesitation will be similar to the historical mistake made prior to the Second World War.

Ali Khamenei will not be satisfied with the little that he has today and surely, and in all secrecy, at the first possible moment will attempt to bully and dominate.

Removing the crippling sanctions without fundamental changes in this regime will not be in Iran’s interest and will only facilitates the Islamic regime of Iran in reaching its objectives.

United States of America and Europe should not jeopardize their long-term interests due to short-term ones.

There are powerful and pro-active forces in the Iranian opposition and if the censorship of the media that are supporting the Islamic regime of Iran were to be removed, the opposition can easily organize and assist the powerful civil disobedience of Iranian people.

Iranian people want peace and freedom; without this regime not only can they ensure the resurrection of a civilized country but also a peaceful region.