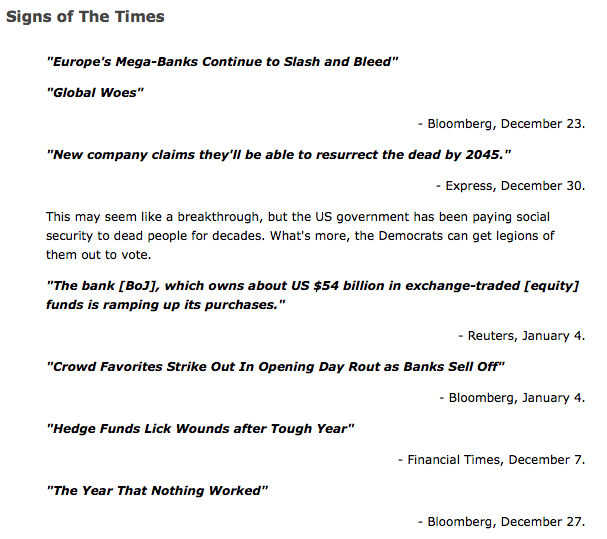 The following is part of Pivotal Events that was published for our subscribers January 5, 2016. Is the setback a violent correction or is it the start of another severe contraction?

Let’s look to Mister Market and Mother Nature, who are really running the show. Central bankers and endless debates about miniscule changes in administered rates have been and will always be expensive distraction.

Historical market patterns and thorough technical research has been competent.

Last August’s hit to global financial markets was preceded by significant reversals in spreads and the curve. Ironically, not even the Fed can prevent such reversals. The one in June and the “breakout” in July ended excessive speculation in all of the hot games.

During December the curve flattened to new “lows” for the move and spreads accomplished another “breakout”. The latter was noted in our Special Memo of December 8th.

The Transports and the old Dow Theory anticipated the top of the general market (NYA) in May. At 7300 this week, the Transports have taken out the December low at 7361 and the August low of 7452. This is critical and if its prophetic nature continues this decline in the overall market could be more than a brief setback.

The hit has very little to do with the Fed Rate increase or to the re-opening of large-account selling in China. If anything, these were catalysts. It has more to do with changes in credit markets that essentially started in June and became serious in July.

Out December 23rd Pivot concluded “Banks and Broker-Dealers remain elevated and are vulnerable.”

Going the other way, we have been looking for the “Rotation” trade as resource and material sectors bottom. This would likely be in the November-December window.

Doubtful, so positioning long can wait.

The financial sector has been vulnerable and is slipping.

BKX traded above the 200-Day ma through November and this week has dropped below the 200 and the 50-Day moving average. This also takes out the last low at 72 a few weeks ago. Support at the August hit low at 67 may not hold.

Essentially, XBD is in the same pattern.

Of interest, both financial indexes peaked in July and reversed as credit spreads broke out on the trend to widening.

Out of the Shanghai Crash the Advance/Decline line rebounded to a double top set in November and is breaking down.

Some work there and it could march up to the 109 level. Let’s call it a target, which would be interesting.

The Canadian dollar is suffering a doctrinaire governor of the central bank. It will suffer the imposition of the extreme interventionist politics that has turned the formerly economically powerful Province of Ontario into a “have not” province.

Ontario has become even zanier than California.[1] And the prospect of the federal government becoming, well, hysterical about every political fad de jour suggests the Canadian dollar will continue down.

The decade of Conservative government was an attempt to return to limited government. Ironically, this was condemned as “austerity”.

Liberal compulsions tend not to just intrude they are expensive.

Federally, economic nihilism will be imposed until it is seen not to work.

[1] Ontario’s population is one/third of California’s but it carries twice the total debt burden. The Financial Post reports that Ontario is the “world’s most indebted sub-sovereign borrower.”