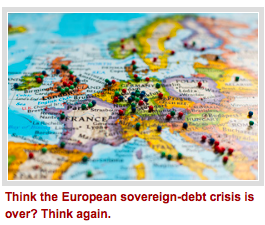 Almost everyone I talk to thinks the European sovereign-debt crisis has passed. They say Greece’s bailout fixed the problem. Europe is on the mend, they say.

But as far as I’m concerned, nothing could be further from the truth.

First, severe austerity measures continue to this day and they are causing debt-to-GDP ratios to worsen.

The proof is in the numbers. Before the Greek crisis flared up, debt-to-GDP in Greece stood at 113%. Today, Greece’s debt-to-GDP stands at a tad north of a whopping 177%. In each and every case, debt-to-GDP is worse than it was at the beginning of the crisis — and the austerity measures are literally causing the entire European continent to implode.

According to Eurostat, Europe’s GDP in the second quarter of 2015 slowed to 0.3%, leaving output 1.2% higher than a year ago. The figure disappointed all 19 economists polled who were expecting 0.4% growth.

France’s economy is slumping. GDP growth of 0.2% was expected, but growth came in at 0.0%.

And Germany’s economy, the only engine left holding the feeble union together, expanded by 0.4%, lower than the consensus forecast of 0.5%.

All of this continues to create …

Third, some of the worst unemployment we’ve seen in modern times.

Unemployment among youth (under 25) is still off the charts. In June 2015, 3.181 million young persons were unemployed in the euro area, an unemployment rate of 22.5%.

Corporate and personal bankruptcies are surging. Social discontent is on the rise again. And tensions between countries within Europe are higher than ever.

Pretty picture? Hardly. It’s the ugliest economic picture for Europe since the 1930s, when 17 European countries went belly up, sending hundreds of billions of dollars’ worth of francs, marks, lira, and more flooding into the U.S.

That, in turn, sent the U.S. stock markets exploding higher. It sent the dollar and gold simultaneously into a moon shot as well. And it’s all about to happen again.

Fourth, deflation is picking up momentum.

With austerity measures squashing growth all over Europe, deflation is starting to run rampant.

According to the latest data, prices eurozone producers charged for their goods fell a whopping 2.2% at the August data release.

In short, nothing, and I mean nothing, has been solved in Europe. The crisis will soon escalate with a vengeance.

When (not if) Europe’s economy roils again:

Second, that flood of capital is going to send the U.S. dollar again into rally mode. Just like it did in the early 1930s when Europe last went bankrupt.

Third, after a correction, it’s also going to send our stock markets roaring higher. Just like it did between 1932 and 1937 when the Dow Jones Industrials soared 387% as Europe went under.

Fourth, it’s going to give you multiple profit opportunities to potentially make more money than you ever dreamed of. In stocks. In commodities. In the dollar. And in gold and silver.

My suggestions right now are …

A. Keep your eyes on Europe. And keep most of your liquid funds in cash, ready to be deployed on a moment’s notice, but as safe as can be right now.

The best way, in my opinion: A short-term Treasury-only fund in the U.S., or the equivalent.

B. Earmark a portion of your cash for speculation. Not too much, and not too little. I recommend 25% of your total investable funds. Funds that you do not need for anything else.

Finally, don’t let anyone kid you. Europe’s problems are simply the beginning of a great sovereign-debt crisis that will soon spread around the globe, creating some of the worst times we have ever seen …

And some of the biggest threats to your wealth, ever. But along with this crisis will also come some of the greatest speculative profit opportunities, ever …

And you should do everything in your power to take advantage of them. I know I will.