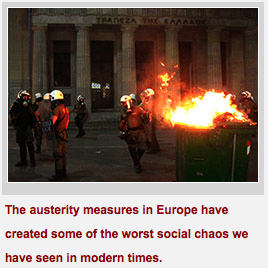 Almost everyone I talk to thinks the European sovereign debt crisis is coming to an end. They claim the decline in the euro will stoke inflation there … that Mario Draghi, the European Central Bank  head, will do everything possible to turn the economy around …

That major European companies are now cheap, based on the decline in the euro … and that the leaders of the euro region are finally getting their act together.

I say baloney, to all of it.

First, severe austerity measures continue to this day and they are hollowing out Europe’s economic growth.

The proof is in the numbers. Before the Greek crisis flared up, debt-to-GDP in Greece stood at 113 percent. Today — according to the most recent data and even after all the write-offs — Greece’s debt-to-GDP stands at a whopping 174 percent.

In Italy, debt to GDP is hovering near 100 percent while France is set to exceed 100 percent early next year.

Clearly, all the austerity measures that Europe has implemented have done nothing to reduce debt levels.

Meanwhile, it’s created some of the worst social chaos we have seen in modern times. Unemployment among youth is still off the charts. From the second quarter of 2008, the youth unemployment rate — those under 25 years of age — has skyrocketed and now stands at a whopping 23.1 percent.

All told, over 24 million people are jobless in the 28 European member states.

Third, European banks are a disaster in the making. Although their ratings have improved lately, most European banks are still saddled down with huge debts. Plus, the sanctions against Russia are killing small- and medium-sized European businesses, which threatens to set off a new round of loans that will go bad.

Pretty picture? Hardly. It’s the ugliest economic picture for Europe since the 1930s, when 17 European countries went belly up, sending hundreds of billions of dollars’ worth of francs, marks, liras, and more flooding into the U.S.

According to the latest data, inflation is running at a very low 0.4 percent. But that hides the problem. In most European countries, prices are now falling faster than at any time since the 2008 financial crisis.

There are huge problems when an economy suffers from deflation. Demand falls off and growth comes to a halt as consumers think, why buy something today when it will be cheaper tomorrow?

That, in turn, causes a host of problems. Debt to GDP worsens, economic activity slows further. Unemployment worsens, and more.

In short, nothing, and I mean nothing, has been solved in Europe. The crisis will soon escalate with a vengeance.

So what does all this mean for you and your investments? A heck of a lot!

As Europe’s economy continues to worsen:

Second, that will likely send global interest rates rocketing higher. The U.S. will not escape rising interest rates. In fact, our rates are now poised to move sharply higher in 2015.

Third, it’s going to send the U.S. dollar further into rally mode. That in turn, will eventually usher in more disinflation here in the U.S., driving commodity prices still lower in 2015.

Fourth, it’s also going to send our stock markets roaring higher. After the current correction completes, which could be the most substantial yet, a roaring dollar again in 2015 could send our stock markets through the roof, just like it did between 1932 and 1937 when the Dow Jones Industrials soared 387 percent as Europe went under.

Fifth, it’s going to give you multiple profit opportunities in 2015 to potentially make more money that you ever dreamed of.

I just gave my Real Wealth Report members the details in my very important 2015 forecast issue. To find out more, and to become a member, click here now.

In the meantime, my suggestions are …

The best way, in my opinion: A short-term Treasury-only fund in the U.S., or the equivalent.