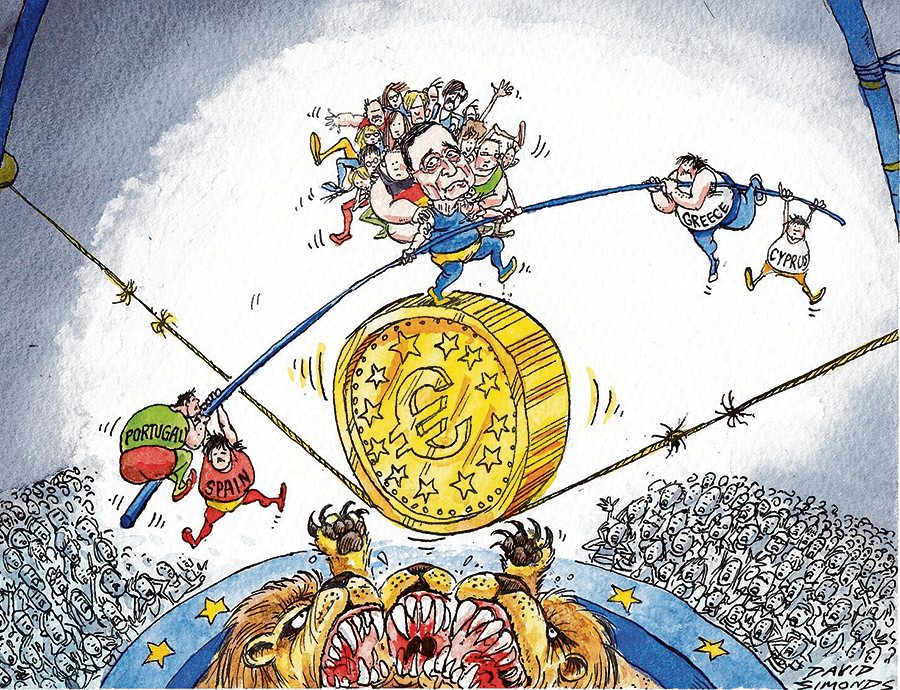 “Well first of all, tell me: Is there some society you know that doesn’t run on greed? You think Russia doesn’t run on greed? You think China doesn’t run on greed? What is greed? Of course, none of us are greedy, it’s only the other fellow who’s greedy. The world runs on individuals pursuing their separate interests. The great achievements of civilization have not come from government bureaus. Einstein didn’t construct his theory under order from a bureaucrat. Henry Ford didn’t revolutionize the automobile industry that way. In the only cases in which the masses have escaped from the kind of grinding poverty you’re talking about, the only cases in recorded history, are where they have had capitalism and largely free trade. If you want to know where the masses are worse off, worst off, it’s exactly in the kinds of societies that depart from that. So that the record of history is absolutely crystal clear, that there is no alternative way so far discovered of improving the lot of the ordinary people that can hold a candle to the productive activities that are unleashed by the free-enterprise system.”

You’ve got to hand it to European Central Bank President Mario Draghi.  He is a talented showman (and personally seems like the kind of guy you wouldn’t mind sipping a dram or two with).  If he worked in a  circus he would be the hi-wire act—a real daredevil who juggles a bowling ball, chain saw, and wheel of cheese as he inches along the wire; with no net of course.  And to make it even more interesting, imagine in the middle of Mr. Draghi’s death defying feat, some French guy stands up and throws a hand grenade into the center ring.  I think that is what just happened this week. “France has entered uncharted political waters after the Prime Minister, Manuel Valls, presented his government’s resignation amid a political crisis triggered by his maverick economy minister who called for an end to austerity policies imposed by Germany.

[Arnaud] Montebourg, 51, [French economic minister] fired his first broadside in an interview with Le Monde on Saturday and followed up with a speech to a Socialist party rally the following day. In a veiled reference to President François Hollande, he said that conformism was an enemy and ‘my enemy is governing’.  ‘France is a free country which shouldn’t be aligning itself with the obsessions of the German right,’ he said, urging a “just and sane resistance”.

As we say in the south: “Them is fightin words.”

In short, French economic troubles have been caused by the German’s adherence to fiscal discipline required under the single currency regime, according to Mr. Montebourg.  I am sure none of France’s problems have anything to do with its nutty Socialism and incredibly inflexible labor policies.  But the damage is done.  The feces are now floating in the proverbial punchbowl for all to see.

It may or may not be Germany’s fault.  Germany taxpayers have made real commitments to the zone while maintaining their individual balance sheet discipline, when others haven’t.  So, whether right or wrong, it is a dangerous game indeed for the euro for high-level French officials to debate this stuff in public.  The single currency could survive Greece leaving.  It can survive the UK leaving the Eurozone.  But it cannot survive if France says “game over.”

I guess the French policymakers either forgot, or don’t have a similar saying as we do in the US: Be careful what you wish for it may come true.  What I mean is the French were very excited to get Germany to sign on to the single currency regime initially.  They believed it was possible to financially control, or at least tame, Germany in a way that hasn’t proved possible on the battlefield.  Silly idea indeed!

You think you’re a busy person, just think of German Chancellor Angela Merkel.  She is in the midst of negotiating some type of stalemate between Ukraine and Russia before it turns into an unmitigated disaster for Germany and Europe (something US policy makers seem to be rooting for).  She has to now figure out how to placate France and not be seen abandoning her commitment to fiscal responsibility across the Eurozone.  Otherwise, all actions on that score and her credibility ring a bit hollow going forward.  Yikes.  And in addition, she has to run to the store and buy a disposable cell phone every other day to keep the NSA snoops away.  Busy, busy, busy…  Likely why she doesn’t vacation as much, or play golf and basketball every day of the week, no matter the crisis of the moment, as our President does. Back on February 24th 2014, in Currency Currents, I asked the question: “Does Germany want deflation?”  [Based on the email I received from that missive, it wasn’t a piece which endeared me to the average German citizen, shall we say.  But please keep in mind when I pen these silly missives, I am almost exclusively talking about a country’s government policies—not its people.  Heck, when it comes to lousy government, you can’t get much worse than where we are in the US now, given where we came from.  I said to my wife the other day.  It seems the United States used to export liberty, free market ideals, and decent cultural standards, for the most part.  Now it seems we export war, regulation, and cultural rot, in my humble opinion. Try not to blame its people.  Most of us aren’t happy with the path America is taking. ]

And this from Leto Research shows how dominant Germany’s net international investment position has become since the euro single currency regime began implementation back in 2002:

Already the pressure on the periphery countries is leading to a brain drain of the best and brightest young professionals into Germany; or become recruits of powerful German companies in the region.  Germany in effect is sucking the productive cream off of the Eurozone.  Hats off—it is a brilliant strategy even if by happenstance—which seems unlikely to me.

As I said, it may be brilliant strategy on the part of Germany; and what is wrong with that?  Countries don’t really have allies it seems to me.  They have relations they find beneficial.  They have countries they find dangerous.  But all countries vie for position against those they do and don’t like.  So should Germany be faulted for outsmarting and rest of the pack?  Did everyone who joined the euro expect Germany to eventually be the sugar daddy out of altruism?

The fact is Germany has benefited from deflation and the austerity that caused it, when you consider its strategic positioning.  That is not to say Germany wouldn’t have rather seen the Eurozone prosper; they likely would have because they effectively have a much lower currency to compete with using the euro than they would if they were still using the D-mark, i.e. they want that game to continue.

The question it seems to me for France to answer is this:  Will France’s long-term competitive positioning as a country be benefited from remaining within the single currency regime (the gold standard in the Eurozone forcing deflation upon its members) or would it be better off to return to the French franc and be able to use its currency as a mechanism for cross-border competitiveness instead of wage and asset deflation?  This question for the first time now seems clearly on the table—in full public view.

And while many are now focused on the French-German question, our hero Mario is still inching along the high wire doing his thing; trying to maintain focus on his technique and professional training.  One slip and there is an even bigger mess in the center of the ring where the hand grenade just exploded.