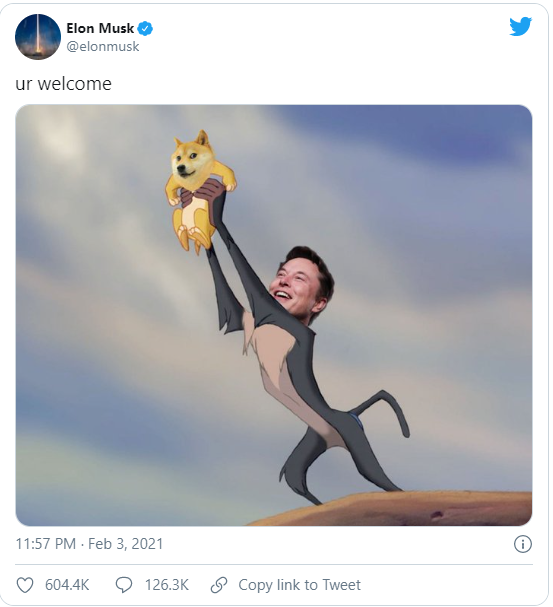 “No highs, no lows, only Doge,” Musk wrote. He also posted a meme from the Disney movie The Lion King, showing the monkey shaman Rafiki holding up the cub Simba that’s photoshopped to be the billionaire with the Dogecoin logo of a Shiba Inu in his hands.

The digital asset, which was started as a joke in 2013, has risen to about 5 cents in the past 24 hours from 3 cents, according to data from CoinMarketCap. It’s the highest level since last week, when prices briefly spiked after Musk tweeted a picture of “Dogue” — a satire on fashion’s Vogue magazine — featuring a whippet in a red sweater.

Earlier this week, Musk said on social audio app Clubhouse that he doesn’t have a strong view on other cryptocurrencies and that his comments on Dogecoin are meant as jokes, adding “the most ironic outcome would be Dogecoin becomes the currency of Earth in the future.”

He wrote on Tuesday that he was going to be “off Twitter for a while.” Musk sent the Dogecoin tweets along with pictures of space rockets — references to the meme that prices are going to the moon and Space Exploration Technologies Corp. SpaceX, which Musk also founded, saw its test flight of a deep-space vehicle end in an explosive fireball during a failed landing attempt this week.

Musk also said “Dogecoin is the people’s crypto,” along with other posts such as “Sandstorm is a masterpiece,” a possible reference to the 1999 song by Darude. He removed the reference to Bitcoin from his Twitter bio page.

Dogecoin’s market value now sits at almost $7 billion, making it the 12th biggest among cryptocurrencies, according to CoinMarketCap.