The average condo price in Greater Vancouver shot up 5% month over month, bringing an end to the divergent trend. Also sending prices to the highest price point since October 2018. March realized a sales price of $699,015 just below the upper echelon of the current market cycle. 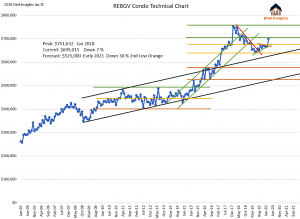 Eitel Insights has suggested selling into this pocket of strength rather than purchasing. Unlike so many other analysts who proclaimed 2019 as the bottom. Sellers who heeded our advice should be overjoyed at achieving the highest sales price over the previous 20 months. While purchasers who took the advice of other analysts might not feel so enthused. 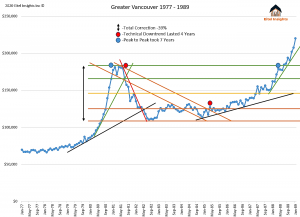 There is a notion that Greater Vancouver would be immune to any significant correction to our Real Estate market. That is a complete fallacy, a little history reminder. April 1981 Greater Vancouver (detached) prices were $181,200. Prices immediately took a nose dive and by August 1982 prices had declined 39% to 110,300. Equally as important the prices remained at correction levels until December 1984 when prices were still hovering at $113,000 -37% from the peak. Of course this occurred during the interest rate hike and that was an extraordinary time. But I would argue we are living in an extraordinary time now as well.

Another live example would be how the equity markets have performed over the recent months. The Dow Jones peak was 29,500 the near term bottom was 18,275 (technically important level) which represented a 38% correction. The TSX has had a similar sell off, at the peak 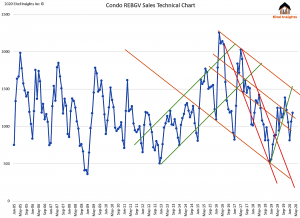 Sales in March were nominal and came in just below 1200 completed sales. One point of interest, the sales numbers recorded by the Real Estate Board are completed sales, meaning the deal has completed at land titles. While the average price that is reported by the board is on accepted offers, which are legally binding contracts but not completed…. Enter the lawyers.

The level of sales Eitel Insights is interested in is 1425. That level of sales has not been eclipsed in the past two years and what we have our eye on during this upcoming quarter. The market will not likely surpass this level in 2020.

The economic landscape is clearly in a negative forecast, with no quick solution obvious. While the National and Provincial Governments attempt to mitigate the Covid-19 impact, inevitably there will be a real life impact for the condo market in Greater Vancouver. Purchasers who have waited this long, might as well continue to wait as the chaos is just about to ensue. 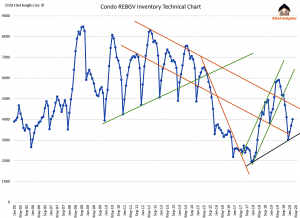 The inventory in March surpassed the 4000 active level. Eitel Insights anticipates the actives to rapidly rise over the upcoming 2 quarters. With job losses transpiring and likely to continue, the only option to accrue money, for most, might be to sell their highest valued asset, the property.

The desperation levels amongst sellers will continue to build as a majority of sellers will attempt to achieve the highest dollar amount and ultimately chase the market lower. Our advice bite the bullet. Offers coming in now will look amazing in a years’ time. 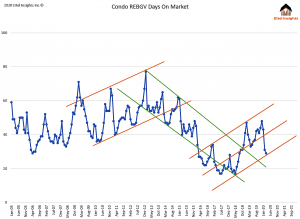 For Eitel Insights clients who have already taken advantage of this pocket of strength just achieved the highest sales price in the past 20 months and sold in the lowest amount of days since September 2018. The active days on market for sold listing in March came in at 29.

Stick with Eitel Insights for Actionable Intelligence through Analytical Interpretation.

Not all markets are created equal while some fall other rise. Become an Eitel Insights client and receive Actionable Intelligence on Real Estate across Canada, visit our website.