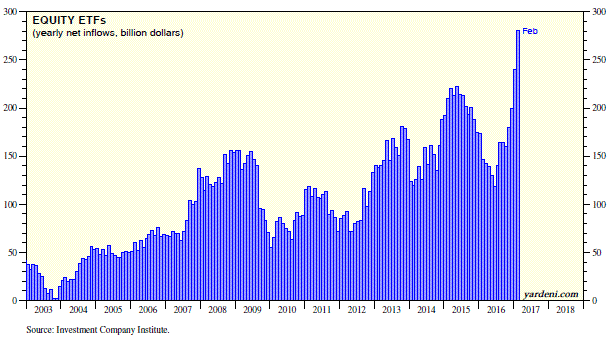 The United States is the world’s largest and most diversified economy! It is currently suffering through a protracted period of slow growth which has held down job creation and labor market participation. The Pew Research Center reported, in late 2015, that a mere 19% of Americans trust the government either always or most of the time.

The FED must print more money in order to keep the party going forward.

The bottom line is that this current bull market has been driven mostly by corporations which are buying back their shares, over the years. Individual investors have increasingly been moving out of equity mutual funds and into equity ETF’s. The Congressional Budget Office (CBO) reported that in fiscal year 2016, the federal budget deficit increased in relation to the GDP, for the first time since 2009. The CBO projects that over the next decade, budget deficits will follow an upward trajectory. The spending costs for retirement and health care programs targeted towards senior citizens, and rising interest payments on the government’s debt will be the root drivers. There will be only a modest growth in revenue collections. This will drive up public debt to its’ highest level of gross domestic product (GDP) since shortly after World War II ended.

The BULLISH Trend in the stock markets is not reversing in the near future.

The stock market is on an upward trajectory. Are you wondering what you should do next?

Do you want to gain the edge that you need in order to beat the markets an profit during both rising and falling prices?

Take advantage of my insight and expertise as I can help you to grow your trading account. Tune in every morning for my video analysis and market forecasts at TheGoldAndOilGuy.com on all ‘asset classes’ and new ETF trade opportunities.

I always take half off of the table, on all positions, to lock in quick solid gains and then ride out the other half for much higher returns! I manage my risk while keeping profits!