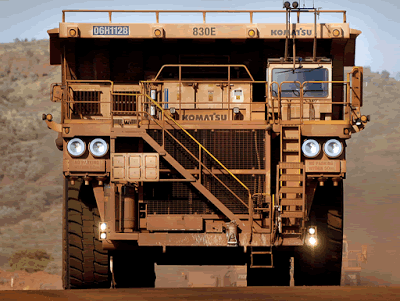 The Alberta oilsands region and the ore mining regions in Australia use some of the biggest trucks in the world.

Above: Komatsu heavy earthmoving truck at the Tom Price iron ore mine, operated by Rio Tinto Group, near Perth, Australia.

Drivers of these behemoths cost as much as $200,000 a year. With that incentive, the push to driverless is on.

The Calgary Herald reports on the and the “threat of big layoffs” as Canada’s Oilsands Pave the Way for Driverless Trucks.

The 400-tonne heavy haulers that rumble along the roads of northern Alberta’s oilsands sites are referred to in Fort McMurray as “the biggest trucks in the world,” employing thousands of operators to

drive the massive rigs through the mine pits.

Increasingly, however, the giant trucks are capable of getting around without a driver. Indeed, self-driving trucks are already in use at many operations in the province, although they are still operated by drivers while the companies test whether the systems can work in northern Alberta’s variable climate.

That is about to change.

Suncor Energy Inc., Canada’s largest oil company, confirmed this week it has entered into a five-year agreement with Komatsu Ltd., the Japanese manufacturer of earthmoving and construction machines, to purchase new heavy haulers for its mining operations north of Fort McMurray. All the new trucks will be “autonomous-ready,” meaning they are capable of operating without a driver, Suncor spokesperson Sneh Seetal said.

“It’s very concerning to us as to what the future may hold,” said Ken Smith, president of Unifor Local 707A, which represents 3,300 Suncor employees. Smith said Suncor has signed agreements to purchase 175 driverless trucks.

“It’s not fantasy,” Suncor’s chief financial officer Alister Cowan told investors at an RBC Capital Markets conference in New York last week. He said the company is working to replace its fleet of heavy haulers with automated trucks “by the end of the decade.”

“That will take 800 people off our site,” Cowan said of the trucks. “At an average (salary) of $200,000 per person, you can see the savings we’re going to get from an operations perspective.”

Some companies though will not comment on the prospect.

As soon as one company makes the push the others have to follow or their ongoing operating expenses will be higher.

These truck driving jobs will be the first to go.

Apparently we don’t need these stinking jobs anyway. They will be replaced by free wind-power from all the windbags in D.C.