Dr Copper, The Economy and The Stock Market No Longer in Sync 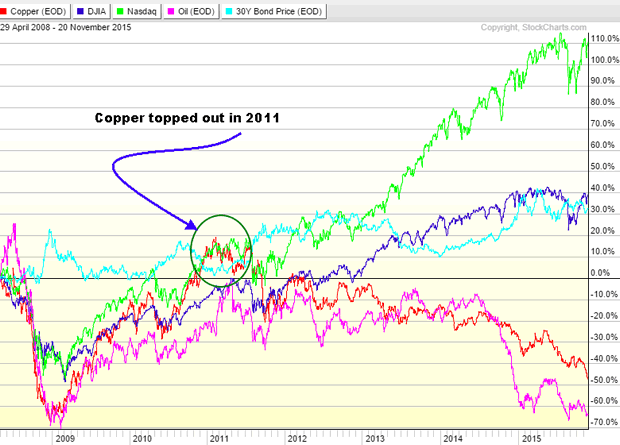 Doctor copper, can no longer be viewed as a leading indicator, in fact, a name change might be in order. A change of name from Dr Copper to deadbeat copper might in order, given its dismal record over the years. After the financial crisis of 2008-2009, the economy, the stock markets and copper parted ways; while the markets and the economy trended higher, copper plunged into an abyss, and it is still trying to find its footing.

All Jokes aside, the reason copper is diverging from the markets is because the Feds destroyed the concept of a free market system long ago. Copper is indicating that this economic recovery is nothing but an illusion. However, several rounds of QE, plus interest rates being held down for a record-breaking period, have altered reality. The markets are moving higher because of hot money, and the economic miracle would end without the low-interest rate band aid. Against such a backdrop, copper ceased to work. In this environment, fundamentals and basic technical analysis can lead you astray; in such an environment Mass psychology works the best. The masses have accepted that Fed intervention is the new norm and that the Fed is the saviour. Hence, this is what investors need to pay attention too, as the psychology of the masses is what drives the markets. Given the old historical pattern between, copper and the markets, the stock market should have followed copper into the abyss, but instead we find that several indices are dangerously close from putting in new highs.

The chart below clearly illustrates how copper parted ways with the economy and the markets. The Dow, the NASDAQ and even bonds have soared to new highs while copper crashed. Surprisingly the only sector that took a similar

path is Oil. However, we suspect that oil will diverge shortly too. Now if the Fed’s really wanted to cement this illusion, they would create the forces necessary to give copper prices a boost. Up until 2011, copper trended with the markets and given the proper environment, copper could trend in tandem with the markets. Until, the hot money factor is eliminated from these markets Dr Copper cannot be viewed as a leading indicator.

Why have the economy and the stock market refused to follow Coppers lead?

As we stated before, any shred of free market forces was totally eliminated after the Fed decided that propping up this market was more important than allowing free market forces to deal with the situation at hand. In fact, we came out with an article in June of this year clearly stating that Free markets no longer existed. First we had QE, this distorted the markets, but when it ended officially, the assumption was that everything would return to the norm. The ultra low rate environment favoured speculation, and the corporate world stepped in with massive share buyback programmes. Quantitative easing never stopped, only the players changed. This year the corporate world is on track to shatter yet another record. According to CNN Money, dividends and stock buybacks are set to hit $1 trillion dollars this year. This amount is larger than the GDP of many nations.

Almost seven years into one of the most hated bull markets in history and still 50% of the crowd is still not investing in the market. In fact, we will soon come out with a short article illustrating that more Americans drink coffee on a daily basis than invest in the markets. The markets never top on a negative note. The media is out with a plethora of negative factors, earnings slow down, energy sector collapse, Terrorism, a possible rate hike in December, and the list goes on.

For now Dr Copper has to hang up his credentials, for Copper is in a coma and in no position to give real guidance on market direction.

There is a lot of negativity in the air, a large percentage of the crowd is still not in the market, and the masses are not euphoric; end-result, this market will rise much further than anyone can currently imagine.