Dr Copper Back from the Dead – time to Buy or Blink 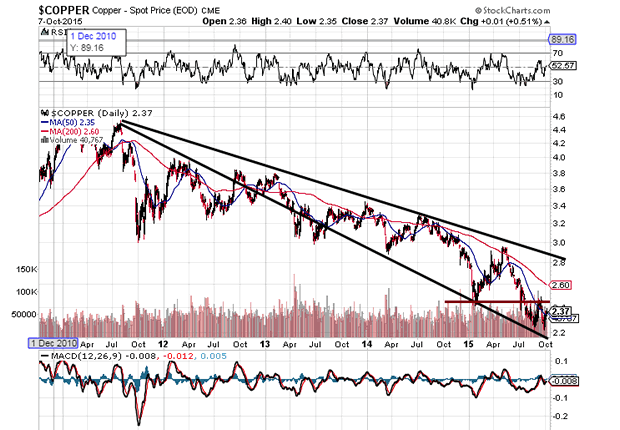 Anxiety is a thin stream of fear trickling through the mind. If encouraged, it cuts a channel into which all other thoughts are drained. ~ Arthur Somers Roche

Once upon a time, in the good old days, before QE changed everything, any signs of strength from copper could be construed as a sign that the economy was on the mend. After QE, this story came to an end, and a new reality came into play. The Fed manipulated the markets in favour of short-term gains through what could be determined as borderline illegal monetary policy; a policy that has maintained an ultra-low interest rate environment that favours speculators and punishes savers. One wonders, what will unfold when copper does finally put in a bottom? Will the financial markets rally in unision once again with Doctor copper, or diverge as they have done for the past several years. Copper is issuing rather strong signs that a bottom could be close at hand. Our, trend indicator has not turned bullish yet, but it is dangerously close to issuing a bullish signal. There are, however, several technical indicators flashing positive divergence signals, and this could be construed as a bullish development. Failure to hold above 2.40 will most likely result in a test of the 2.20 ranges. The ideal setup would be for copper to trade to new lows, and trigger a buy signal in the process. Generally speaking, the elite players love to create the illusion that the market is ready to break out. This ploy is known as a head fake; a move set to fool regular market technicians and the masses into thinking a bottom is in place. If you take the time to look at long term charts, you will see how splendidly this ruse has worked over the decades. The market in question does initially rally, but then it breaks down, the early bulls panic and dump everything. This usually triggers a fast move to new lows and then the smart money rushes in and starts to buy, which then ushers in a more sustainable bottom. Based on this premise, one could argue that this trick was employed in February of 2015. The markets rallied into May and then broke down again. If you look at the above chart, you will notice that this has occurred before, so one cannot put faith on this factor alone. Other factors have to come into play and it looks like those other factors could be coming into play now; we will mention them shortly. Our goal has never been to predict the exact bottom in any market; an endeavour we feel that is best left to fools with an inordinate appetite for pain. We wait for the market to issue strong signals that a bottom is in or is close at hand. Sometimes this means getting in a bit early and sometimes it means getting in a bit later. The idea should be to catch the main move and not obsess on trying to get in at the exact bottom. A monthly close above 2.50 would be a strong signal that that a bottom is in place and that Copper is attempting to mount a strong rally.

Other factors that could be viewed as bullish developments

A plethora of factors such as power outages, extremely bad weather, planned cuts by many of the largest mines in the world, strikes, etc., could potentially push this market into a deficit earlier than many experts assert. This would pave the way for price gains much earlier than expected. Experts are infamous for coming to the party late and leaving way too early. While the action in the copper markets looks promising, copper is still not out of the woods; a monthly close above 2.50 would serve as the first strong bullish confirmation that copper is getting ready to mount a sustainable rally. Our trend indicator has not turned bullish yet, but it is dangerously close to doing so. Once it turns bullish, we will start to look at this sector in a more aggressive manner. As the market is extremely oversold and there are signs of a potential reversal, it would make sense to look at some of the stronger plays in this sector. SCCO and FXC are examples of two decent plays in this sector. One could also go long via COPX (Global X Copper Miners ETF) and JJC (iPath DJ-UBS Copper). We advised our subscribers to get into FXC at 9.00 and if the sector continues to show signs of strength, we will look to add to our position and deploy additional funds into new stocks in this sector.

History clearly illustrates that when an asset is cheap and sentiment is negative that the time to buy is close at hand. Mass psychology dictates that you should be wary when the masses are joyous and overjoyed when they are not. The crowd is decidedly negative and so an opportunity could be in the air.

Indecision is debilitating; it feeds upon itself; it is, one might almost say, habit-forming. Not only that, but it is contagious; it transmits itself to other. ~ H. A. Hopf