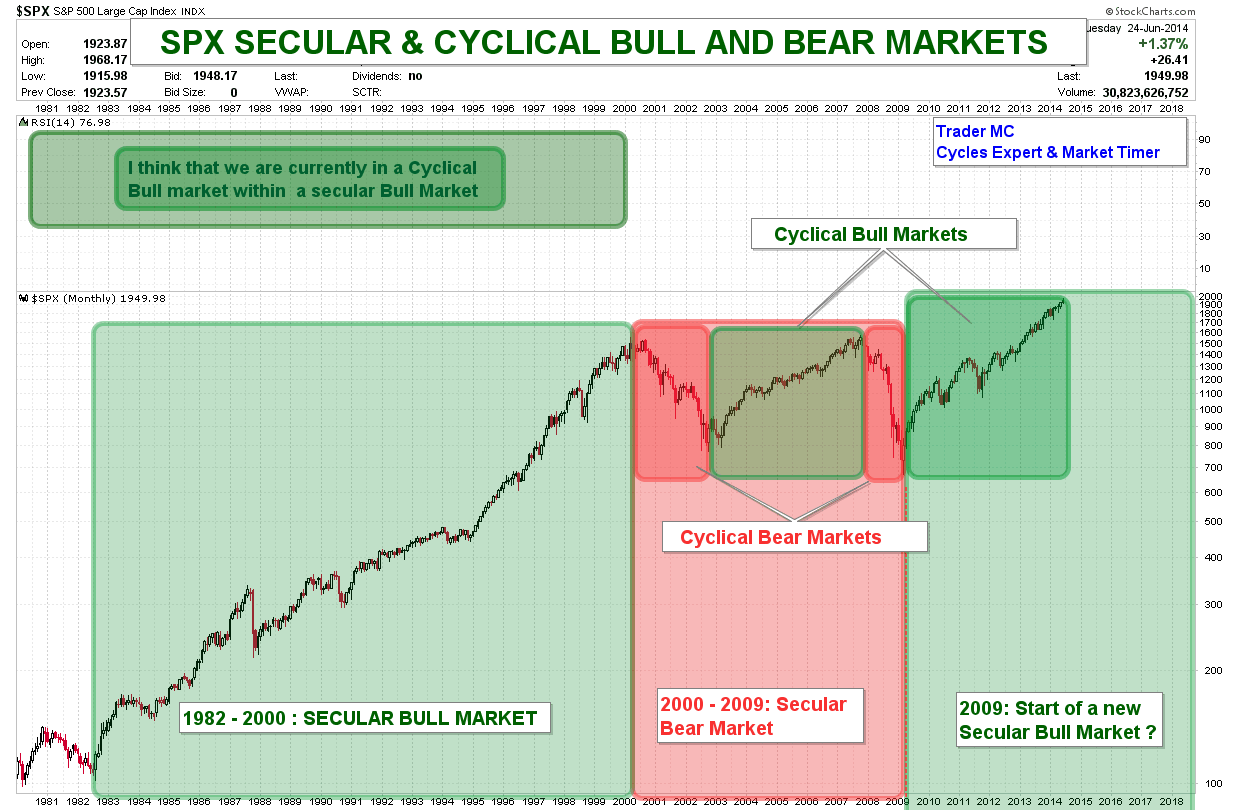 On the following chart you can see the Secular and Cyclical Bull and Bear Markets: (Click Chart for larger view) The history of the market shows that the Dow Jones Bull Market often topped between Weeks 261 – 268. Currently at Week 275 from March 2009 low, we should be very close to an intermediate top.

Here is the period duration of Cyclical Bull Markets:

The previous examples are showing us that history repeats itself and I am more and more inclined to think that March 6, 2009 low was the beginning of a new Secular Bull Market and that the Bear Market from 2000 high to 2009 low has ended. This Bear Market lasted 9 years (465 weeks for SPX) and looks very similar to the previous Bear Market from Jan 19, 1966 high to Dec 9, 1974 low that also lasted almost 9 years (461 weeks). It is important to keep in mind that the Stock Market movements always anticipate the general economy whether it is a recession or a recovery. That is why the Stock Market is usually not related to the economic news when a major bottom or a major top occurs.

While the majority is looking at the Megaphone Pattern correction since 2000 high and is expecting the market to go back to the lower trendline of this pattern and to make new lows, I think that it will not happen. The opinion of the majority can be used as a contrarian indicator. I think that a healthy correction in this new Secular Bull Market could push the Dow Jones to 12500-13500 (end of 2015 – half 2016) followed by a second leg up of this new Secular Bull Market.

The corrections from low to low during the previous Secular Bull Market and the last Secular Bear Market from 2000 to 2009 lasted between 334 and 444 weeks with an average of 382 weeks.

Here is the time duration of periods between the major lows: According to the Elliott Wave Theory impulsive moves are made of 5 waves and I think that the market is very close to finish an extended Wave 3 and to plunge into a corrective Wave 4. As Wave 3 is extended there is a possibility that Wave 5 will be truncated. After Wave 5 I expect the market to plunge into a major low in 2016 to keep pace with its previous lows every 7 years and then to enter a new impulsive leg up for at least 5 years. Forecasting the market accurately is impossible but studying the market history makes me believe that a new Secular Bull Market has begun in 2009. I think that the money flow will continue going into the Commodities sector until the market bottoms in 2016 but once it will, investors should be back in the Stock Market. The next major low in 2016 could be a once in a generation buy opportunity in the US Market.

Cycle Trader MC OU is not a registered investment firm or a financial institution. Any opinions, news, research, analyses, prices, or other information contained on this website and any messages sent from Tradermc.com and/or by Cycle Trader MC OU are prepared for informational and educational purposes only and do not in no means constitute investment, financial, legal or other advice. The content disclosed express personal opinion of the authors at the time of writing and is not a solicitation, or an offer to buy or sell any security, make financial transactions or use any particular trading system or to act in any other way. The information delivered is based on best research using data believed to be reliable, but there is no guarantee as to its accuracy and Cycle Trader MC OU shall bear no direct or indirect responsibility for any errors or omissions. From time to time, Cycle Trader MC OU and the owners and operators of Tradermc.com may hold positions in some or all or any of the securities mentioned, but are under no obligation to hold such positions. Cycle Trader MC OU will not accept liability for any loss or damage, including without limitation to, any loss of profit, which may arise directly or indirectly from use of or reliance on information delivered by Cycle Trader MC OU or third parties through use of Tradermc.com. The website and any of the messages will not provide readers with personally tailored advice concerning the nature, potential, value or suitability of any particular security, portfolio, transaction, investment strategy or other matter. By accessing or otherwise using this website, you are deemed to have read, understood and accepted this disclaimer.