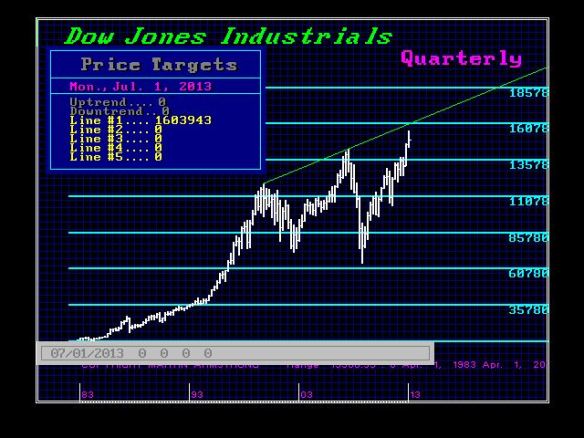 The Dow Jones Industrials are approaching the major top of the up uptrend channel. which stands at the 16000 level for the 3rd quarter. We have a turning point in September. The real question is will we breakout and move into a Phase Transition going into 2015.75? This depends entirely how we interact with this technical resistance projection. We can exceed it, and then fall back to retest it from above. Holding this projection then becomes  the springboard for a Phase Transition to the upside.

The second pattern would be to peak at this projection in September, fall back as retest support holding the Weekly Bearish Reversals generated from that high, and then resume the uptrend to blast through to the upside. in 2014.

Many question have been coming in regarding seminars and a forecasting report for the share markets. We have these under consideration right now. The maximum target for the Dow Jones Industrials by 2015.75 is actually 43,390. This becomes a viable target depending upon all markets and how they set up for September aft er the ECM mid-point target of August 7th.

The minutes of the Fed meeting are showing that we may not be talking about tapering the Quantitative Easing, we may be looking at its end. Bernanke is leaving because the Fed has no room to manipulate the economy no less interest rates. This is perhaps the greatest dissent within the Fed we have every seen. QE is going to die and Bernanke is leaving. So say Hello to the next 2 years.