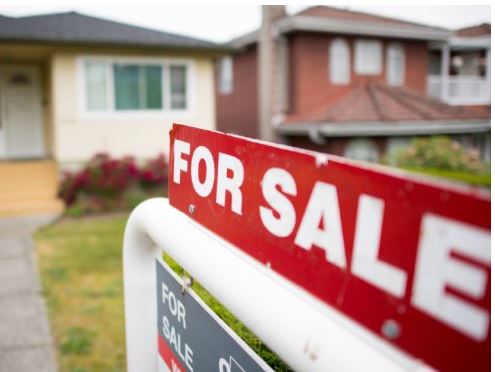 Sell in May and go away, an adage used primarily in the stock market, applies to Vancouver’s Real Estate in 2020. In all actuality one should have sold much sooner than May, but better late than never. Home values dropped over 100 Thousand dollars from March to April across Greater Vancouver. With more significant losses forecasted.

Many analysts and even the Greater Vancouver Real Estate Board had touted a significant price increase for the detached market in 2020. Reality has hit them all hard, along with their ardent followers. Prices are still up from the beginning of the year albeit only a measly 7 thousand dollars. From $1.590Mil in January to 1.597Mil in April. Signalling the peak of the 2020 detached prices has already come and gone. 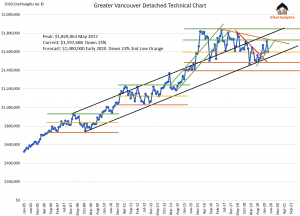 Eitel insights had strongly suggested selling into that perceived strength, and advised to hold off on any potential purchases. The chart above demonstrates why. Prices for a majority of 2019 were near the 1.50Million threshold (Higher Orange) which held as a temporary bottom, and in turn stabilized the market enabling a rally up to 1.709Million to occur in March. We have seen this movie before of pricing threshold temporarily holding only to be broken on subsequent tests.

During 2017 – 2018 prices tested the 1.60Million threshold which temporarily held. However a pricing threshold is akin to a camel, one added straw will break this markets back too. 1.60Million broke early in 2019 much like 1.50Million will break in 2020. Leaving 1.40Million as the next threshold inevitably tested.

Now, we advise, Don’t try to catch this falling knife. Prices are down over $230,000 from the peak which is good. It will become even more attractive with time. As prices decline to 1.40Million that will exemplify a discount of $430,000 to the market from the peak.

There is no rush to enter this market, we suggest patience. 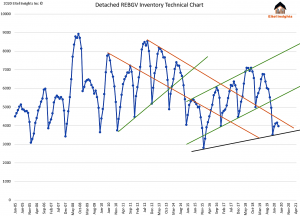 Inventory for the month of April waned as expected due to covid – 19, and the social distancing. The active listings are still above the staunch uptrend, finishing the month with just under 4000 properties for sale.

Once the social distancing relinquishes, the inventory will rapidly rise. A need for money has become a harsh circumstance for a majority of households. The stock markets have lost the equity gained over the previous two years. There isn’t even a possibility to work extra hours, as most work places have been closed, some never to reopen.

With few options remaining, selling real estate will become an unfortunate necessity. Which will inevitably lead to foreclosures coming to the market as well. None of which puts pressure on the buyers. If selling, take the hit early before the knockout punch is landed. 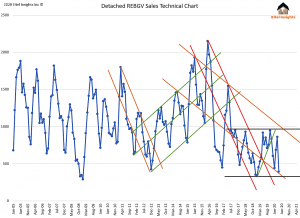 The housing market just experienced the lowest sales in April on record. For some perspective during the 08 -09 recent recession the sales for April were at 1298 and 1188 respectively. Sales numbers plummeted to only 393 home sales in April. Sub 400 sales have only occasionally occurred during the winter months, never in the spring markets. Sounds bad but there is an additional kicker.

As we have been pointing out for the past few articles, sales data is from land titles, meaning, the upcoming months will see likely even lower numbers reported.

The number of accepted offers so far this year, beginning with January, was over 500. February saw nearly 800, and March realized just under 700. Meaning the sales data from land titles of 393 sales came from completions on those previously accepted offers.

The kicker, April’s accepted offers were just over 200… the worst is yet to come.

One of my favourite quotes is as follows which will lead into my final thoughts. “While the individual man is an insoluble puzzle, in the aggregate he becomes a mathematical certainty. You can, for example, never foretell what one many will do, but you can say with precision what an average number will be up to. Individuals vary, but percentages remain constant. So says the statistician.”  – William Winwood Reade

Eitel Insights’ forecast of 1.40 Million was offered by back in 2016 and published in 2017 (Western Investor). Not only were we the first to forecast the peak of 1.830 million, we forecasted the bottom at the same time. The housing markets are no longer guess work. Fundamental factors continually show up late to the game. By utilizing our actionable intelligence buying low and selling high is no longer based on a gut feel, it is technically predictable.