GOLD: Now is the Time When We Juxtapose

Posted by Greg Guenthner via The Rude Awakening 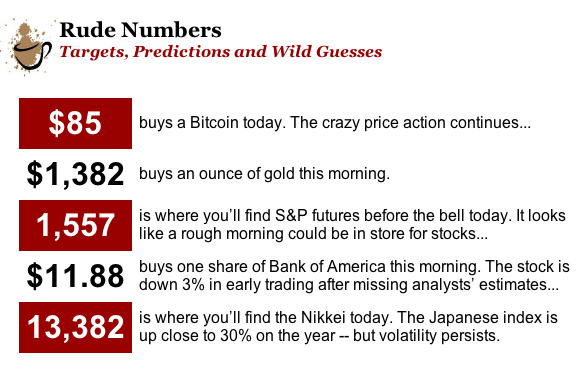 What Smart Minds Think on Gold

Despite plunging prices, the smart minds still see precious metals as the best option for preserving (and likely increasing) the purchasing power of one’s wealth.

John Hussman: markets are dangerously out of equilibrium; precious metals will provide security during the inevitable correction. John Mauldin: gold is essential insurance against central bank monetary recklessness. Mish Shedlock: renewed stress in the credit markets is inevitable; gold will be one of the smartest/safest places to park capital during this time. Charles Hugh Smith: cash and gold are prudent positions given market fundamentals and both will likely rise from here.

Richard Russell, an economic analysis legend, says today’s financial market conditions are unprecedented. Today’s elevated market prices are dangerously unsupported by fundamentals, and caused by manipulation and opportunistic self-interest by central planners, big banks, politicians and corporations. “What else but gold?” should investors hold at this point, he asks.

Mike Maloney is frustrated by efforts to suppress the gold and silver price, even though it’s allowing savvy investors to accumulate metal cheaply. But the false signals given by low prices keep the smaller investor, who could benefit most from protecting their wealth, from entering the market. And even though he remains confident precious metals prices will be much higher in the future, those prices will be the result of a destruction of the monetary system and a corruption of the free markets.

None of these smarter minds is a cheerleader. They arrived at their positions through empirical analysis. They are not pushing gold to make a buck or advance an ideological agenda. These are concerned men looking to find options that will help their followers prosper.

Weeks like this are just noise. In fact, they’re good opportunities to add to your positions at lower cost.

And now for a VERY FIRM OPINION – ED

Plus: My overdue Bitcoin bragging rights!

Gold’s dropping. You want to buy.

But wait just a minute…

Is your desire to buy gold now based on reasonable analysis of market conditions? Or is it simply an emotional reaction to the selloff?

Let’s turn to one of your letters for some answers:

“Short-term I can understand your premise on gold,” writes a somewhat reasonable reader.

“Markets are doing well so people head in that direction. But for the long-term, I’m a buyer. I think there’s a lot of inflation coming. So I’ll slowly buy in expecting lower priced and will be excited when they fall. But later I’ll expect higher prices and will be excited as they rise… sort of.”

I can’t make this any clearer: You shouldn’t even consider trying to buy gold right now.

After all, you are a long-term investor, correct? Give gold a chance to consolidate or move lower. When was the last time you saw any asset class permanently recovered from a violent drop the very next day? It just doesn’t work that way…

There will be snapback rallies and more downside. Expect to wait a long, long time before a suitable base forms.

Also, think about what you just wrote: Markets are doing well so people head in that direction…

Apply this line of thinking to gold. The gold market was booming. So naturally, people headed in its direction. Investors, traders, hedge funds and your crazy coworker bought gold. People wanted to own it because of its performance. Now they are leaving. And they won’t be rushing back to buy anytime soon.

Look, I know there’s a ton of shouting going on out there about where gold might end up.

Every blogger and financial journalist with 15 free minutes and a WordPress account is publishing their own takedown of gold after its big drop.

But where were these guys last month? Where were they when gold began telegraphing trouble in February after it broke below $1,650? If had to guess, I would say they simply weren’t paying attention. It’s so easy to pile on after the fact…

However, this is not your signal to jump into gold to prove them all wrong.

The loudest howls (by far) are coming from those defending gold. They pound the table about multinational conspiracies, computer trading, and the unwashed masses selling gold for all of the wrong reasons. They’ve even blamed the charts that they loved so much over the past 10 years!

I’ll pose the same question I asked the detractors:

Where were these arguments when gold was soaring higher every month? Why has the narrative suddenly changed?

Any way you twist it, powerful emotional forces are at work. Denial is in control right now. Acceptance is a long way off…

I repeat — don’t jump back into gold. It’s too soon.

If you are well versed in trading, you could try to play a snapback move in gold futures or miners.

If that’s your game, keep tight stops and expect the unexpected. This thing is just getting started… “Hey Greg, you forgot the bragging rights for calling the Bitcoin rocket blastoff and harsh landing,” writes an astute reader.

You’re right. I forgot that one. But I’m gonna strain my shoulder if I continue to pat myself on the back at this rate…

Also, remember my note last week about the Goldman report? I said shorting gold would be a risky move. Talk about a missed opportunity. In that case, running with the devil would have worked out perfectly.