Don’t Be Fooled by Gold’s Glitter 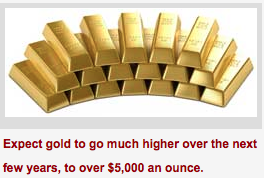 I wish I were wrong. I wish gold has bottomed. But there is nothing, and I mean nothing, that convinces me that my models on gold are wrong. Only in the very short-term.

Keep in mind my models on gold have never missed one single major turning point since 1978. Not one.

There’s always a first time for everything, so with that in mind, I have been studiously watching the gold market this year — more than ever before — fully open to the idea that I could be wrong.

But as I just said, I have yet to be convinced that my models are wrong.

First, and foremost, the January low that did not happen merely means the gold market is undergoing a “cycle inversion” — one that pushes the final low off to the next important cyclic period for a major low, which is May. Second, no major buy signals have yet been hit in gold during this cyclic rally inversion.

We are approaching the $1,320 level now. If gold closes above it on a Friday basis, you can expect a further rally. But I doubt very much gold can close above $1,449.50.

Third, the trading pattern of gold’s recent rally is not that bullish. In Elliott Wave terms, which I often use as an additional tool, gold is in a fourth wave upward correction, one that is accompanied by declining trading volume.

You can see it in this chart. Notice the sloppy upward slopes of the recent rally. It’s choppy, characteristic of a correction. At the bottom of the chart, notice how the volume of trade has been declining. That, too, is characteristic of a bounce and not the start of something much bigger.

Also note the Fibonacci extensions I have drawn on the chart for you. If gold’s rally ends near its current level — an “e” wave of a fourth wave upward correction — then the next leg down, the fifth wave, would find gold falling to at least $1,062.50, and more likely, even lower, to about the $967 level.

I find it fascinating that on my system models I have major support and sell signals at the $1,059 and $962 levels.

Derived from an entirely different model that has nothing to do with Elliott Wave Theory — when the two point to the same conclusions and support, I consider it a kind of double confirmation that my models are going to end up being right.

Double-bottoms are a misnomer. They almost always give birth to a temporary rally, but then the market turns south again and demolishes the double-bottom, spiking to substantial new lows.

I believe the same thing is going to happen to the June/December 2013 double-bottom in gold (and silver as well).

There are many more reasons I believe the current rally is nothing more than a correction and that new lows are likely ahead, for both gold and silver.

But right now, I want to outline the two main scenarios for gold going forward.

Scenario A: Gold’s rally stalls at current levels or slightly higher, then it resumes its downtrend. That’s the scenario right now according to my models. New lows will then be seen by May, and the bear market will finally be over.

In this scenario, gold would still retrace a very large part of its first wave up and decline back to the mid or low $1,200 area before resuming its new bull market.

In other words, even if I am dead wrong, we would have a chance to get on board at much lower levels.

What about any further rally from current levels? Should you get in now? That’s up to you. I can only tell you what I am personally doing and recommending. The answer is no.

I prefer to buy gold, or any market for that matter, when my models give me a 90 percent probability that the bottom is in. Right now, those models are saying that there is less than a 25 percent chance we have seen the bottom.

What about mining shares? Or silver, platinum and palladium?

Same applies. I do not believe any of them have bottomed.

I know it’s tough to watch gold go up and not participate. It’s tough for me too. But discipline and patience is key. And in the rare event that I’m wrong, keep in mind that …

One, you will still get a chance to get on board during a major pullback. And …