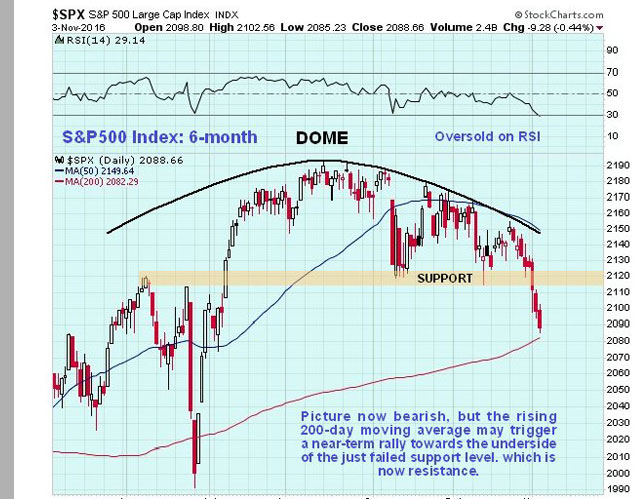 Technical analyst Clive Maund takes a look at the current state of the U.S. stock market, and reflects on how the outcome of the impending election might steepen a decline. A number of subscribers have written in asking about the technical state of the broad U.S. stock market, which we haven’t looked at for a while. With the failure of an important support level a few days back and the election drawing near, it’s certainly a timely question.

We’ll start by looking at a 6-month chart for the S&P500 index, on which we see that early this week, forced lower by the “distribution dome” shown, it broke down below important support. Ideally, we should have shorted it on its last approach to the dome boundary after the middle of October, but we missed the chance. Now it has already arrived at its rising 200-day moving average, which may generate a near-term bounce back up to the failed support; this is now resistance, where the market may again be shorted, perhaps by means of puts in something like SPDR S&P 500 (SPY). 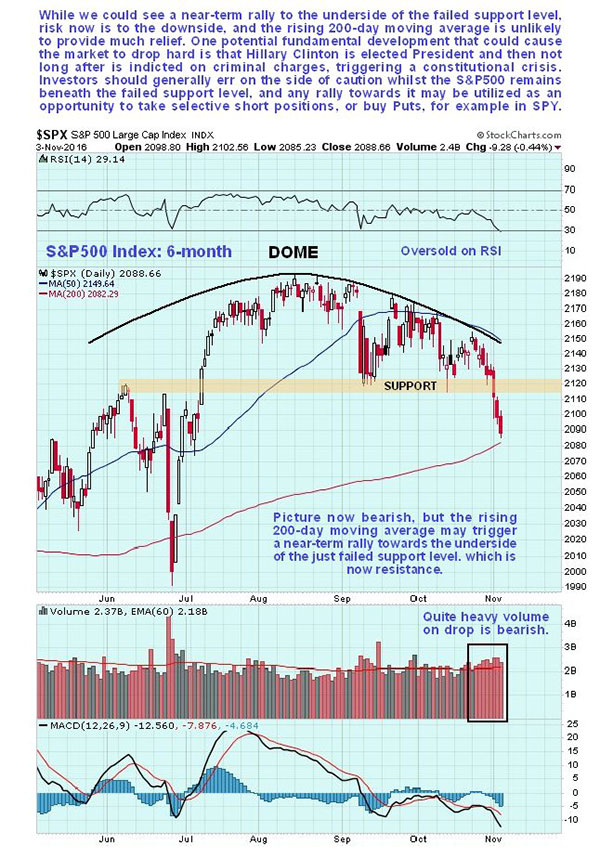 On the 1-year chart all becomes clear, and we see why the market is now dropping away. It is being forced into retreat by the fine, large dome pattern shown now pressing down on it from above—this is what triggered the support failure early this week. Volume has been persistently heavy on this drop, which is bearish, and the moving average convergence/divergence (MACD) indicator shows that there is plenty of room for it to drop further. An immediate downside target is the support shown in the 2000 area. 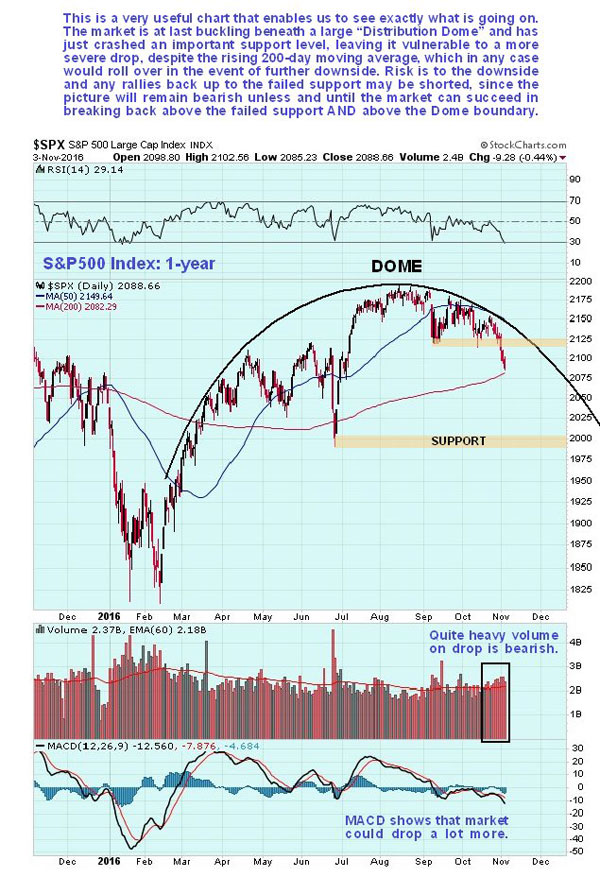 The 3-year chart shows that the current dome is the successor to an earlier one that took much longer to form. The earlier dome forced the index to plunge back toward 1800 early in the year, after the Fed’s foolish and tiny interest rate rise last December, but aborted soon after. This illustrates that these domes can and quite often do abort. The crucial point is that until they do, the trend can be assumed to be down, and knowledge of the position of a dome boundary enables the judicious placing of overhead stops to protect any open short positions. 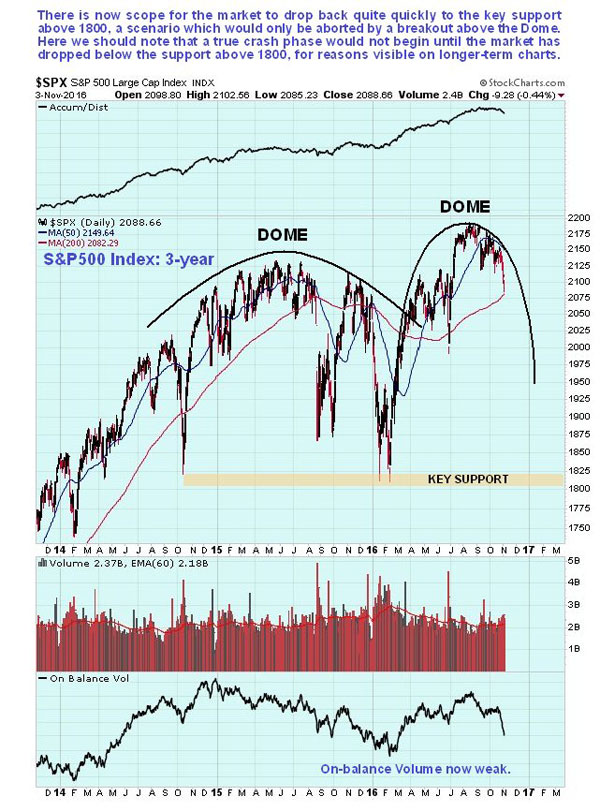 The 10-year chart is useful as it puts the action of recent years into perspective. On this chart we can see that a potential top area is forming, but that it won’t be confirmed as such unless and until the index breaks below the key support at and above 1800, which we already looked at on the 3-year chart.

If this support does fail, it would usher in a true crash phase, and the risk of a near vertical plunge. One fundamental scenario that could trigger this would be a constitutional crisis arising from Hillary Clinton first being voted into the presidency, and then being indicted as a criminal. Although it may seem farfetched, this is not beyond the bounds of possibility. Outside of the U.S., Clinton is widely perceived to be a liar, a crook and a warmonger, who has only escaped prosecution thus far because of cronyism and nepotism—she is above the law. Many average voters are simply too ignorant and insouciant to comprehend what she is really like—many do though, to a greater or lesser degree, and will only vote for her because they like Trump even less.

However, even inside the U.S., the intelligence community and various others that she has crossed and insulted are deeply fed up with her, and they have recently been supplied with all the ammo they need to bring her down, if they so choose. And that could happen fast.

Returning to the 10-year chart, the key support shown may not fail. In the event that so-called helicopter money becomes fashionable, it could take off again and advance to new highs, regardless of the state of the economy. 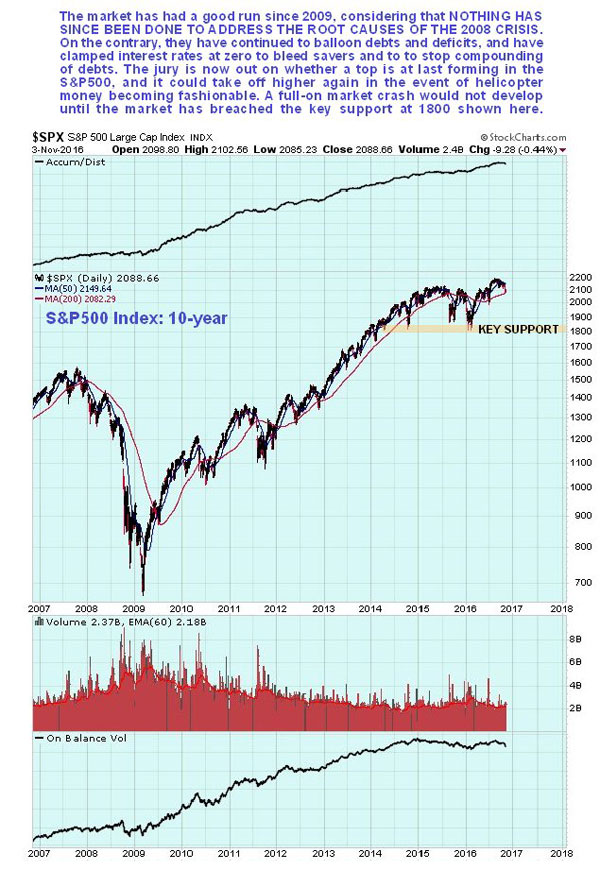 Conclusion
The trend of the market is down, and it may be traded to the downside as long as the S&P500 index remains below the dome shown on its 1-year chart. A near-term bounce toward this will throw up a shorting opportunity. There exists the possibility of a more severe decline setting in soon.

Clive Maund has been president of www.clivemaund.com, a successful resource sector website, since its inception in 2003. He has 30 years’ experience in technical analysis and has worked for banks, commodity brokers and stockbrokers in the City of London. He holds a Diploma in Technical Analysis from the UK Society of Technical Analysts.