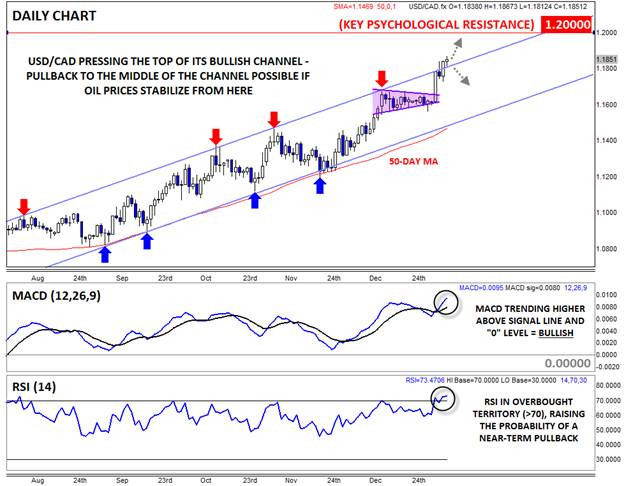 After tagging a new 6-year low under 47.00 earlier, WTI has bounce back to the mid-48.00s as of writing. This brief recovery is spilling over into oil-dependent currencies like the Norwegian krone and Canadian dollar. My colleague Kathleen Brooks already discussed the NOK in detail earlier today, but USD/CAD is also at a very interesting crossroads.’

After consolidating within a tight pennant formation around 1.16 over the slow holiday trading period, USDCAD aggressively broke out to a new 5.5-year high on the first trading day of 2015. The pair has since surged all the way to the top of its bullish channel in the mid-1.18s, helped along by strong bullish momentum as shown by the MACD indicator (below). While the medium-term trend remains constructive (indeed, this is one of our favorite bullish charts over the next few months), there is scope for a possible pullback over the short term. If oil prices manage to stablize in the coming days (and we admit, it’s a big “if”), USD/CAD may dip from its overbought extreme back to the middle or bottom of the established channel. On the other hand, if oil continues to collapse at a mind-boggling pace, USD/CAD could accelerate out of its channel and surge to 1.20 or higher. Either way, the price action over the next 24 to 48 hours could set the tone for the next week or two.