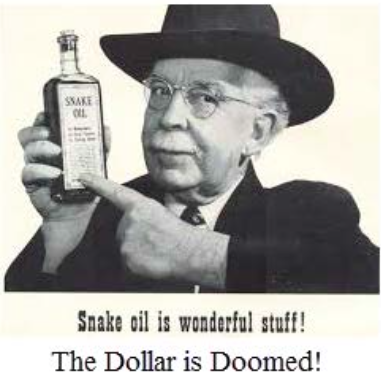 “Surely nobody would be a charlatan, who could afford to be sincere.”

There seems to be a lot of confusion about the US dollar reserve currency status. The biggest fallacy is the belief the US $’s reserve status bestows some great benefits on the US economy. It doesn’t. In fact it’s quite detrimental. I am penning this piece now because I noticed the snake oil salesmen (aka pundits and gurus who like to scare people using the dollar as their boogeyman) are out in force yet again.

In their never-ending series of dollar doom (DD) forecasts, predictions, confusions, hallucinations, lies, and manipulations (I will let you pick which of the words you wish to attach to your favorite double-D guru) I must say the latest incarnation they are peddling from the back of their wagon is a real whopper.

The DD punditry is now providing not only a specific reason why (“world money” will replace the dollar), but an exact date (the end of this month) to their crystal-ball-ology. I am not making this up— really. Of course the go to trade, once again, is gold. $10,000 an ounce on the way…again!

Rationale/Fallacy #1: The dollar will be confiscated by international authoritieswho will be issuing “world money” and sending dollars back to the US in shipping containers. LOL…Now seriously, if I have to explain why this is total crap, you shouldn’t be wasting your time reading Currency Currents anyway. And don’t think this forecast is based on some miraculous issuance of International Monetary Fund Special Drawing Rights (SDR). SDRs are a claim on currency (they are not currency); and there is only a miniscule amount available anyway relative to the needs of the global monetary system. And guess what: The US dollar is the largest weight of the currency basket on which said SDRs are based. [Could one-day the SDR play a bigger role in the global monetary system? You bet. Is that one-day anytime soon? No way, as evidenced by the complete fecklessness of the G-20. Would a bigger role for the SDR be bad for the US economy—nope…in fact it would be very good for the US economy, which leads us to fallacy #2…

Rationale/Fallacy #2: The US dollar world reserve currency status will be challenged. This is one of the most consistent “go to” snake oil salesman rationales in the book. Every DD worth his weight in yuan pulls this one out of their basket of confusion when needed. But then again, most of the PhD’s in economics buy into this fallacy (no surprise there I guess).

Let’s use the US-Chinese relationship as our standard for understanding the detrimental role of the reserve currency at it relates to excess foreign reserves invested in US Treasuries:

Remember these key contentions. Foreign buying of US Treasuries…

Okay, here we go with the example, I will do this in bullet point format in order to help simplify because it is confusing (balance of payments accounting is supposed be so simple):

• Now, one of two things can happen:

Now, it is precisely this additional borrowing by the US government which increases the supply of bonds which in turn pressures interest rates higher. [Additional private borrowing to support the prior standard of living also creates problems of its own as this borrowing is primarily spent on consumption and/or real estate—neither of which produce a cash flow to retire the debt.]

Net foreign buying of US bonds

So, where is the great privilege here? Why do other countries get so worked up when someone starts buying their bonds, as they buy US bonds? For example Japan makes sure it sterilizes any impact of China buying its bonds by turning around and buying a similar amount of US Treasuries to neutralize the impact. If this reserve status was so great why would Japan not embrace China’s buying of its bonds?

A French finance minister, Valéry Giscard d’Estaing, coined the phrase “exorbitant privilege” to explain the role of the US dollar in the global monetary system (even though the French, and the rest of Europe for that matter, piggybacked on artificially low exchange rates relative to the dollar after the War and never revalued—talk about no good turn goes unpunished.)

But Mr. Giscard should have known better. He would have had he read anything from economist Robert Triffin who expressed this warning about a US dollar replacing gold in the monetary system:

In 1960, Triffin testified before the United States Congress and warned of serious flaws in the Bretton Woods system. His theory was based on observing the dollar glut, or the accumulation of the United States dollar outside the US. Under the Bretton Woods system, the US had pledged to convert dollars into gold, but by the early 1960s, the glut had caused more dollars to be available outside the US than gold was in its Treasury. As a result, the US had to run deficits on the current account of the balance of payments to supply the world with dollar reserves that kept liquidity for their increased wealth.

Despite the end of Bretton Woods, the dollar’s role is still hugely dominant as the reserve currency. And guess what: the US runs a large and chronic current account deficit with the rest of world.

So, if another country took on the burden of reserve currency status, or some incarnation of Keynes idea at the Bretton Woods conference—the bancor—is reincarnated, the US economy will be much better off.

So, the next time Mr. Snakeoil tries to scare you with the usual “loss of reserve currency status” canard, tell them: That’s great! I am investing in America.