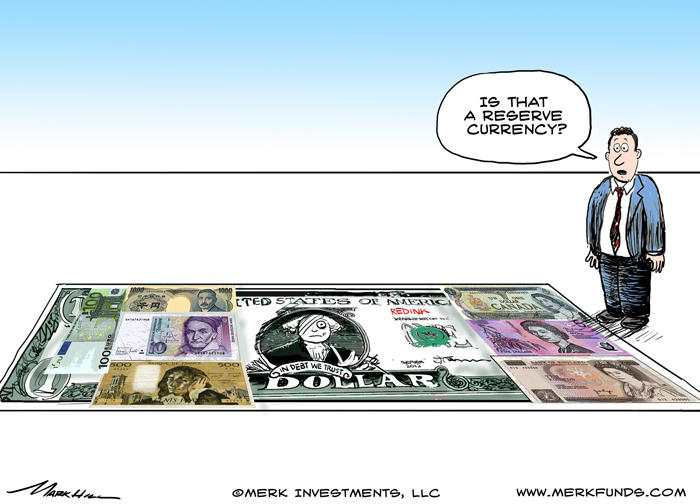 Is the dollar’s seemingly relentless rise in recent years coming to an end? What are the implications not only for the greenback, but other currencies and markets around the world? The chart below shows the U.S. dollar index over the past 40 years together with its longer term moving average, as well as 1 and 2 standard deviation bands. To some the chart may suggest that exchange rates are mean reverting; some will see a longer-term declining trend in the dollar; others will point to what may be considered an extreme valuation given that the dollar index has been around 2 standard deviations above its moving average. To us, the fact that the dollar has moved so far from its moving average, gives rise to the question whether the dollar rally may be over. Let’s consider some arguments for and against ‘peak dollar’: U.S. rate hikes?
It’s widely anticipated that the Fed will continue to raise interest rates. So why would the dollar not rise? It turns out that we have been told for years now that the Fed will ‘exit’ from its extraordinarily accommodative policy. In our analysis, the U.S. dollar historically appreciates in anticipation of a hiking cycle, but not necessarily as rates actually move higher.

Rate differentials
What about rate differentials? The European Central Bank (ECB) just lowered rates again. While all else equal, a high interest rate differential may benefit the higher yielding currency, all else is rarely equal. Betting on such rate differentials is also referred to as a ‘carry trade’ strategy. In our analysis, carry trade strategies tend to perform well in ‘risk on’ environments, i.e. in environments when equities and other ‘risk assets’ do well. Let’s pause to reflect that the U.S. dollar historically is considered a ‘safe haven’ when there is a ‘flight to quality.’ Remember 2008, when the dollar was widely considered the ‘only safe place in town’? Well, the yen substantially outperformed the greenback that year, but, yes, the dollar – and notably U.S. Treasuries – were two of the few places where investors found refuge.

But we have observed that for some time now, the U.S. dollar has tended to follow dynamics more typically associated with a high yielding currency, that is to rally in conjunction with the equity markets. This is no accident, as, on a relative basis, the U.S. dollar, has indeed become a high yielding currency versus many of its peers. The flip side of that is that we have observed the dollar often declines when equity markets plunge. This suggests that investors might want to gain some non-dollar exposure as a way to diversify their portfolio. Except they might want to hold non-dollar cash rather than equities, as international equities may also suffer when U.S. equities are under pressure.

Rates bottoming in rest of the world?
We have heard many central bankers complain that their currencies are overvalued and that rates might go lower. But last week, ECB chief Mario Draghi released what we think was a bombshell. During the Q&A of last week’s press conference, he said: “From today’s perspective, and taking into account the support of our measures to growth and inflation, we don’t anticipate that it will be necessary to reduce rates further.” (bolding added) No, he did not misspeak, as he mentioned a second time during the press conference that rates may not go down any further. There are a variety of reasons why he might indicate that rates have bottomed, including:

The conclusion we draw from this is that the bottom of the interest rate cycle may well be in for the Eurozone. Take Draghi’s word for it, not ours. And we think his position creates a whole different dynamic for the U.S. dollar.

On a somewhat related note, we have been arguing for some time that interest rates in Sweden, for example, are way too low. The economy there has good growth and low unemployment; it’s just that inflation is rather low. In our view, the Swedish central bank (Risksbank) has been paranoid about ever more negative rates in the Eurozone; with that risk off the table, the Riksbank may soon be courageous enough to reverse course.

Swiss National Bank President Jordan has also come out [saying?] that there’s a limit as to how far rates can go down.

Commodity currencies
If you see a trend above, these are all European currencies. In contrast, so-called commodity currencies (e.g. the Australian dollar and Canadian dollar) have not been at zero or in negative territory. The dynamics there have also not followed traditional patterns. Still, Mr. Poloz, the head of the Bank of Canada (BoC), last week stated that the BoC wants to see how fiscal policy plays out before deciding on whether to cut rates further. Canada is one of the few countries that appears to be getting a serious fiscal stimulus (Prime Minister Trudeau was quick to discard his election promise to only have minor deficits).

Australia is a bit of a special base, as central bank governor’s Glenn Stevens term is expiring later this year; if we understand Mr. Stevens correctly, he wants out as the governor that did not need to resort to extraordinary policies. Indeed, the Australian economy has rapidly been adjusting, with the weaker Australian dollar helping.

New Zealand, also considered a commodity country, in contrast, just lowered rates again, a reflection that the economy might have a more difficult time adjusting than Australia’s.

Emerging markets
All that said, before we get too far ahead of ourselves, let’s have a look at emerging market currencies. After declining rather substantially, they may be due for a rebound. But let’s not forget that these tend to be tightly managed currencies. The dynamics there, in our analysis, are much more driven by liquidity than many other factors. And may make these currencies move more in tandem with U.S. equities.

Stock market?!
At the risk of oversimplification, the dollar’s fate over the coming months may well be decided by how the stock market is doing. In many ways, the Fed’s actions may also be tied to how the stock market is doing (but that’s an analysis for another day). If our analysis is correct, a rising equity market may bode well for the U.S. dollar; a falling equity market may bode poorly for the greenback.

We may be a tad biased, having provided an analysis last August that we think a bear market is upon us. In the context here, we might want to add that sovereign wealth funds may need to sell U.S. dollar denominated investments to cover budget shortfalls back home, providing pressure on both equities and the greenback.

This report was prepared by Merk Investments LLC, and reflects the current opinion of the authors. It is based upon sources and data believed to be accurate and reliable. Merk Investments LLC makes no representation regarding the advisability of investing in the products herein. Opinions and forward-looking statements expressed are subject to change without notice. This information does not constitute investment advice and is not intended as an endorsement of any specific investment. The information contained herein is general in nature and is provided solely for educational and informational purposes. The information provided does not constitute legal, financial or tax advice. You should obtain advice specific to your circumstances from your own legal, financial and tax advisors. Past performance is no guarantee of future results.