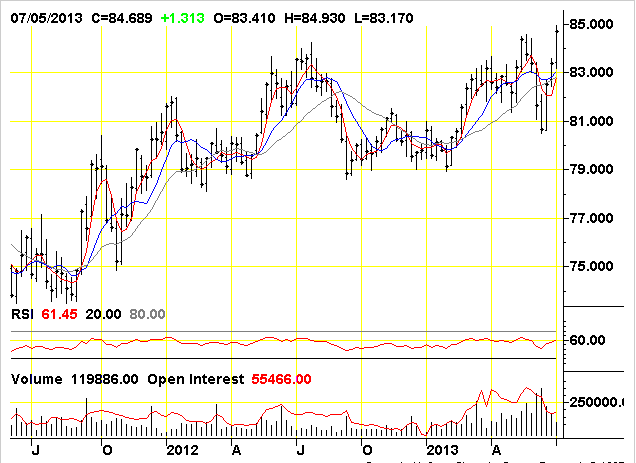 ….Presses Gold To 3 Yr Weekly Low Close.  Silver futures for September delivery tumbled 4.9 percent to $18.736 an ounce on the Comex, the biggest decline since June 20. The metal has dropped 38 percent this year, the most among the 24 raw materials in the Standard & Poor’s GSCI Spot Index.

The greenback climbed as much as 1.6 percent against a basket of major currencies, eroding the appeal of gold as an alternative investment.

The US jobless rate stayed at 7.6% however, rather than slipping as forecast. But average hourly earnings rose 2.2% annually against the 2.0% analysts predicted. The DOLLAR PRICE of gold dropped $20 per ounce lunchtime Friday in London, briefly dropping through $1220 per ounce after the release of June’s US non-farm payrolls data.

“With the US economy improving, US interest rates rising and the Dollar no longer perceived to be at risk,” says the latest Commodities Weekly from French investment and bullion bank Natixis, “the need for a safe haven against currency debasement and inflation dissipated.”

“Should the Dollar continue to strengthen, so gold prices will remain under pressure,” says the note, as Western investors continue to sell exchange-traded gold funds.

Chinese gold buyers, in contrast, imported the second-largest volume of bullion on record in May, new data showed Friday.

Over the 1st five months of the year, China’s net gold imports stood at twice the level of 2012.

Across in India meantime – likely to be overtaken by China this year as the world’s No.1 gold consumer – “It is difficult to sell even 5 kilograms per day as the marriage season is almost over,” said Chennai wholesalers MNC Bullion to Reuters on Friday.

Fighting both the typical gold summer lull of Chaturmas and new government curbs on imports of gold bullion, India’s major retail chains “are aggressively promoting diamond jewellery” says the newswire, as well as expanding overseas in Singapore and Dubai.

“Gold has been the traditional form of savings among Indian households for many years,” says B.Venkatesh, founder of financial advisors Navera Consulting, writing in The Hindu.

“Buying gold gives you a feeling of comfort…Gold is accepted at all times, [giving] you feeling that it is a ‘safe’ asset.”

Silver prices fell faster than gold, losing some 3.0% for the week after the non-farm payrolls data.

Both gold and silver neared the end of London trade Friday with lowest weekly finish against the Dollar since August 2010.

The US Dollar also rose Friday against the Euro and Sterling after the non-farms jobs data, touching 6 and 17-week highs respectively.

The European Central Bank and Bank of England had confirmed their record-low interest rates for the foreseeable future on Thursday.

By Friday afternoon in London, both Euro and Sterling gold prices had cut their earlier gains, but were heading for their first weekly gain in six.

“Even if the NFP data [had come] out below expectations, we would look for rallies in gold and other precious metals to fade.”