“THIS IS “CRITICALLY IMPORTANT” 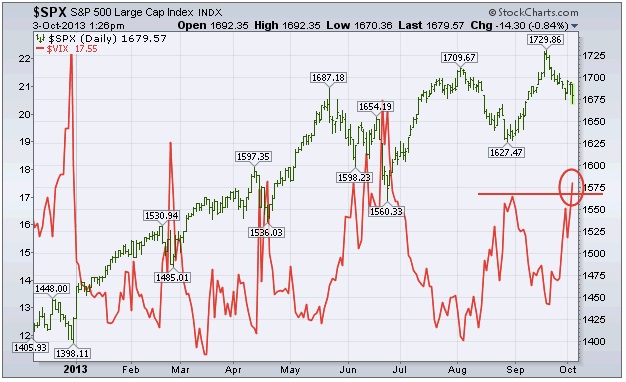 T”he US dollar is poised right on the edge of a cliff.”  said the Godfather of newsletter writers. A lot below in this powerful commentary – Ed

“The chart below shows the S&P Composite, and the red line is the VIX or volatility index.  As you can see, the VIX has risen to its highest level since July.  Thus, the VIX is sensing some volatility to come over the next few months.  As a rule, I usually ready myself for some market volatility when the VIX climbs from a dull period to over 20.  We’re not quite there yet. The chart below is the one that I believe is critically important — it’s the US dollar.  The US dollar has acted as a safe haven for money in the US and all over the world.  Thus, if we get a sell signal on the dollar it will have international implications.

Because it is so important, I am also including this P&F chart of the US dollar.  The dollar appeared to be ready to break out on the upside, but a sudden reversal took the dollar down to the 80 box.  The dollar is poised right on the edge of the “cliff.”  A decline to 79 would look bad, and a further decline to 78 would result in a sell signal with the possibility that the dollar would then test its most recent low at (god forbid) 73. This chart of gold offers a portion of hope. We now have a four-box rally off the low of 1280.  If gold can hit the 1340 box we will have what every gold-bug is praying for — a reversal to the upside, taking gold above the bearish red trendline.  What are the odds that this will happen?  If I knew, I’d be richer than Warren Buffett. This is very important since as I’ve noted before, Ben Bernanke will not tolerate deflation.  Thus, this chart is telling us that tapering is not in the cards.  As deflation becomes more visible, I expect the world’s central banks to battle against it with ever-greater portions of quantitative easing.  This, of course, will set off a bull market in gold and silver.”