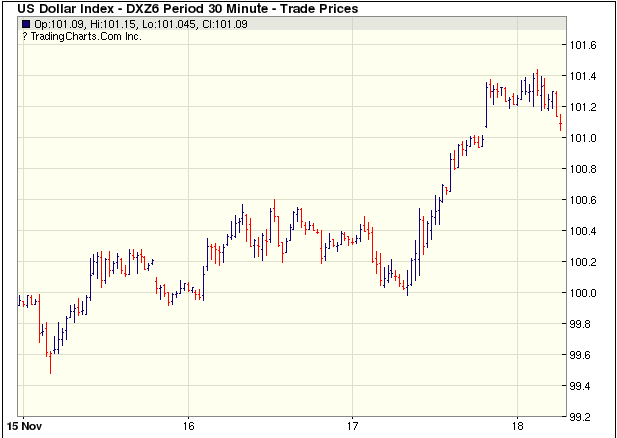 Battered bonds and emerging market currencies enjoyed some respite on Thursday as the dollar took a breather from a post-U.S. election charge that has taken it to a 13-1/2 year high. The financial market looked set for a quiet start and Europe’s main stock markets were shuffling sideways as the dip in global bond yields cooled bank stocks, which have been rising on hopes higher yields will led to better lending profits.

The dollar dropped a modest 0.1 % against other top world currencies after data showing the biggest increase in U.S. consumer prices in six months.

But the fact it hadn’t quite clawed back yet marked a change of direction after eight days of back-to-back gains that have seen it jump almost 4 %.

“The momentum of the Trump rally (in bond yields and the dollar) has faded a bit so we are all trying to recover,” said Rabobank strategist Philip Marey.

He said investors were mainly trying to get a handle on what U.S. President-elect Donald Trump is likely to do when he takes office in January, as well as position for what now looks almost certain to be a U.S. interest rate rise next month.

Trump was set for meeting with Japanese Prime Minister Shinzo Abe in New York while in her first comments since last week’s election, Federal Reserve chief Janet Yellen said the case for a rate hike has strengthened.

“Such an increase could well become appropriate relatively soon,” Yellen said in remarks due to be given to Washington politicians later.

For bond markets, which have taken the brunt of the Trump trade, the most significant event overnight was the Bank of Japan’s attempt to cap 10-year Japanese government bond yieldsand make good its recent promise to keep them pinned at zero.

That had pushed the yen as low as 109.30 yen per dollar and the Japanese currency was creeping around there again as the first flurries of U.S. trading began.

More broadly, Japan’s efforts will raise questions about how far central banks such as the ECB and others will be willing to tolerate steep and sudden rises in government borrowing costs.

The ECB published the minutes of its recent meeting showing Mario Draghi and his colleagues plan to lay out the next steps for their stimulus program next month.

Speaking in Frankfurt one of the ECB’s policymakers Yves Mersch said: “I believe that (talking about exiting stimulus) is probably still premature, given the fragility of the European growth path.”

Germany’s benchmark 10-year Bund yield fell as much as 5 basis points to 0.26 %, moving away from a peak of 0.396 % hit on Monday—the highest level since late January. Other euro zone yields were 2-5 bps lower on the day.

“The BOJ’s move shows that there is a bit more of an effort to cap yields and, knowing that, other bond markets can be more stable from here,” said Mizuho strategist Peter Chatwell.

The rout in U.S. bond prices also halted, with Treasury yields pulling back to 2.15 % only to inch upwards again back towards an 11-month high above 2.3 % hit earlier in the week.

It came as crude oil prices kicked higher as Saudi Energy Minister Khalid al-Falih said he was optimistic that OPEC would formalize a preliminary output freeze deal reached in Algeria back in September.

Gold had still lost roughly $100 an ounce from last Wednesday’s post-U.S. election high on the back of the sharp rise in bond yields and burgeoning appetite for risk.

Emerging markets, also battered by the jump in the dollar and borrowing costs and the prospect of a major shake-up in trade deals under Donald Trump, remained on edge.

The Malaysian ringgit hit a 10-month low on increasing fears that authorities could introduce capital controls, while Mexico’s peso inched away from recent all-time lows ahead of what was expected to be an interest rate hike later.

“The central bank needs to send a strong message,” said Carlos Serrano, an economist at BBVA Bancomer, who was expecting a 75-basis-point hike.