Does This Week’s Rally Change Anything? 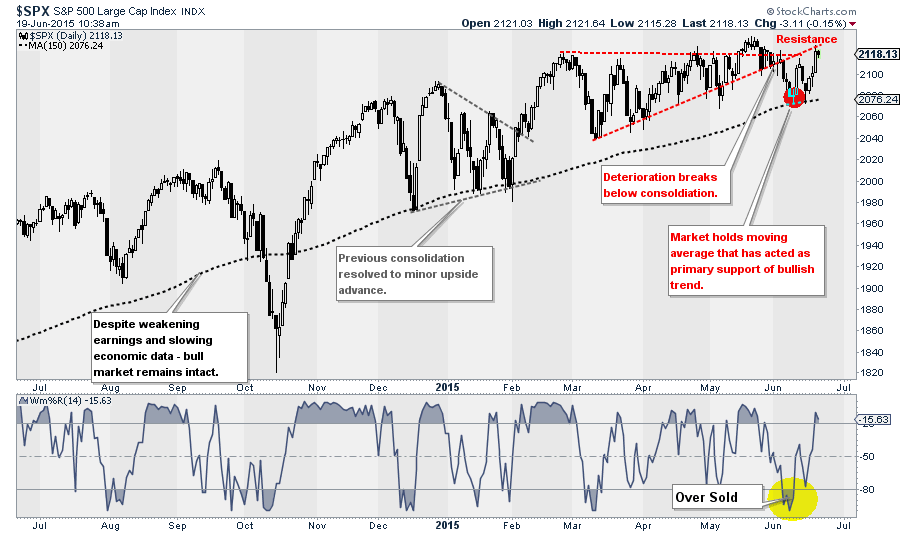 Two weeks ago, I stated that that the markets were oversold enough for a bounce. That bounce came with a vengence this week as the lack of Fed action on raising interest rates spurred the bulls with a continuation of ultra-accomodative policy.

The problem is that the rally this past week retested the previously violated bullish uptrend. As I discussed with one of my favorite reporters yesterday:

“While the rally this week was nice, it failed to break back above resistance which it needs to do to reestablish the bullish trend. Currently, the markets have held the long-term bullish trend line that has remained intact since December of 2012 with two successful tests over the past month. That is bullish for now and indicates buyers are still in the market. However, there is a BATTLE being waged between the bulls and the bears as prices have continued to deteriorate from early-year highs. That battle should be resolved soon, and for now the bears have the advantage.“ Importantly, notice that the previoulsy OVERSOLD condition in the lower panel is now back to OVERBOUGHT. This suggests that the rally is likely near completion. This does not mean that the markets can NOT rally to new highs, they certainly could. However, the risk, for the moment is to the downside. However, as stated above, the BULLISH TREND remains intact which keeps portfolios allocated towards equities.

Very importantly, the last sentence above does not mean that the elevated risks that currently prevail should be ignored. As I stated…..

…..click HERE or on the “inside THIS ISSUE” to read more