Does This Portend The End Of Neoliberal Idiocy

Posted by Michael Every of Rabobank 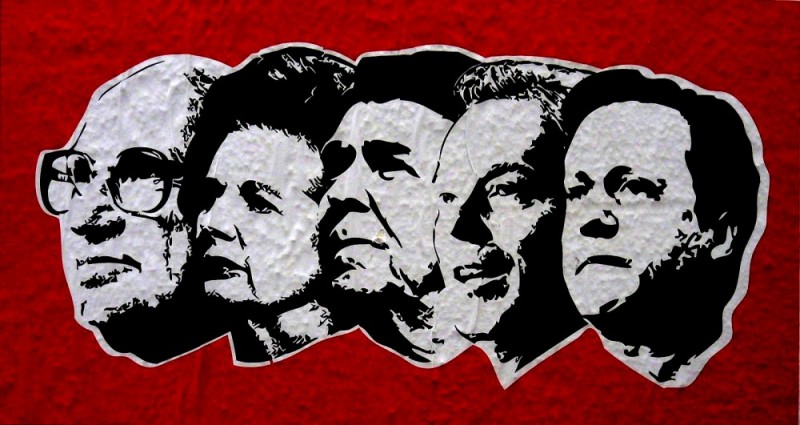 As Tolstoy said of ‘War and Peace’, it’s “not a novel, even less is it a poem, and still less a historical chronicle.” I agree: it’s a schlep. It’s one of those epic novels that you look at and think – can I? And I must confess, with my eyesight, I can’t. Of course, that doesn’t mean one isn’t aware of what the book covers, the Napoleonic war between France and Russia, or its key question – is history driven by powerful underlying forces, or powerful leaders?

That question, Russia, and war and peace, are all going to be key today. Russian President Putin is due to speak to his Federal Assembly against the backdrop of the largest military mobilization since the Cold War, and perhaps in the region since World War Two. This has already seen the closure of the Kursk Strait, and it now includes shutting down the airspace around the region until April 24. Nobody knows what Putin will say, and it could all just be rhetoric, with the army in the background to warn the West not to try to expand NATO eastwards. Yet there are also suggestions Putin may announce the annexation of the Donbas region of Ukraine, within which 650,000 have claimed Russian passports in recent years.

The first question is what the Western response would be to a unilateral redrawing of national borders: and the answer is very little short of rhetoric and sanctions; and any real sanctions would hurt Western economies a lot – particularly on the cost-push inflation side. The second question is if we would see a (Western-backed?) Ukrainian military response – and then a Russian reprisal, and how far into Ukraine given the scale of forces amassed if so; or if Russian agent provocateurs will try to instigate to the same ends. Yet the limited room for a pain-free Western response remains the same. (For a more on this issue, please see here.)

Those who speak Russian know the Peace in Война и мир is a homonym that also means World, so the book’s title can be ‘War and the World’ if one wants it to be. Homonyms aren’t seen only in Russian – try peace and piece in English. Which, to paraphrase Mel Brooks, may have Putin proclaiming: “All I want is peace! Peace! A piece of Ukraine, and a piece of…..”. But how large a piece might mean no peace for the world?

Yes, no decoupling, please! Yet as Bloomberg also argues today, China’s digital CNY, while no threat to the USD as a reserve currency (as it’s an electronic version of a currency nobody wants), or a way to avoid sanctions –which remains to be seen– still “appears potentially more geopolitically significant as leverage over multinational companies and governments that want access to China’s 1.4 billion consumers. Since China has the ability to monitor transactions involving the digital currency, it may be easier to retaliate against anyone who rebuffs Beijing on sensitive issues like Taiwan, Xinjiang, and Hong Kong.” As former US Deputy National Security Advisor Mat Pottinger is quoted: “If you think that the US has a lot of power through our Treasury sanctions authorities, you ain’t seen nothing yet. That currency can be turned off like a light switch.”

So good luck to multinationals heartily agreeing that decoupling is unwanted, as they try to straddle the US, and its growing thicket of USD sanctions wrapped around a human rights foreign policy focus, and China, with its Panopticon e-CNY that can be turned off to ensure US sanctions and human rights foreign policy have no power over it. Somewhere in-between this Scylla and Charybdis sails the good ship Liberal World Order, the crew all merrily singing “I am the very model of a Build-Back-Better General.”

New Zealand already appears to have jumped the gun(ship) here, with its foreign minister partially walking away from the post-WW2 Five-Eyes western intelligence grouping if it involves doing anything about China.

Anyway, somewhere that powerful leaders are not being seen and powerful –dare I say revolutionary?– forces are sweeping in, is football. The European Super League, so derided in this Daily for the past two days, has crumbled. All six English clubs have pulled out, with one or two even apologizing to “legacy” fans, and the vice-chair of Manchester United resigning. Victory for the people’s game! Victory for localism over globalism! Well, yes,…except it’s far from certain the British government will now act as promised to deliver real power back into fans’ hands via partial ownership of the clubs they worship to stop this happening again. Moreover, the pre-existing football structure we revert to includes an expanded gilt-edged Champions League format, and a game that is still more about money than it is about anything else.

The primary way this now happens of course is that central banks pretend that not only do they not see the asset inflation they are deliberately stoking, they also don’t see the supply-side cost-push inflation. Instead, they talk about the wage inflation they can never stoke alone – and which even fiscal policy in tandem can’t either without people power ‘football’ policy. As we have just seen, this will also have to involve decoupling and (peaceful) redrawing of economic borders around a local, national, or limited international perimeter. On which note, the US push for a new liberal world fiscal order is reportedly already in trouble (no!) because Amazon doesn’t want to join the party: ‘Taxation Dies in Darkness’, it seems.

So to conclude my own epic here, which way are the powerful forces of history leading us? And what are powerful leaders going to do to either resist or accelerate this momentum? It seems odd for a global financial market with the attention span of a bowl of borscht to have to consider, but that kind of Tolstoyan question is still one for the ages. Today particularly so.