Does A Commodities Crash Mean Global Depression, Mass-Devaluation Or Both? 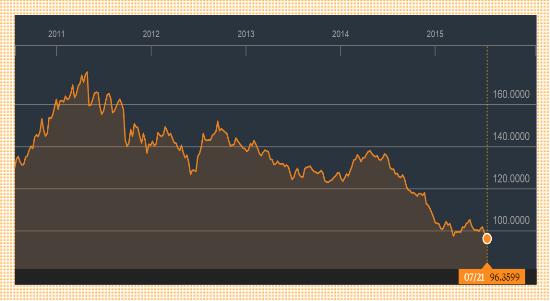 First, precious metals peaked and began drifting lower. Then copper fell, oil plunged and it became obvious that these weren’t isolated events. The entire commodities complex — that is, all the physical inputs a modern economy uses to power, transport and build stuff — was in sustained decline. Here’s the Bloomberg Commodities Index over the past five years: Now, after the past week’s free-fall, commodities are front-page news:

Global commodity prices have slumped amid a glut of supply and low demand – and now experts are foreseeing the prospect of deflation in the West.

A basket of commodities measured by the Bloomberg commodities index has fallen to an 11-year low, and the index is down 42 per cent since its peak in 2008.

The “commodity supercycle” was the term to describe the boom in commodity prices pre-crisis, when global growth was steaming ahead and supported demand. Although commodities have had a hard time post-crisis, falls in the price of everything from from gold and oil, to copper and nickel have accelerated. Tin has fallen 25 per cent so far this year, Nickel is down 54 per cent from its February 2011 high, and natural gas has slumped 40 per cent over the same period.

There is a glut of industrial commodities on the world market and with growth flagging, demand is simply not strong enough.

Slightly different dynamics are at play in the oil market, as Saudi Arabia has vowed to keep Opec’s production high despite weak demand. Already-low oil prices have fallen 10 per cent in the last month, ahead of the lifting of US sanctions against Iran. There is known to be a significant amount of supply stacked up in Iran and waiting to hit the world market. Brent crude for September was down to $56.75 a barrel yesterday morning.

ASK DOCTOR COPPER
Perhaps most telling is the price of copper, which is trading around its lowest level since the financial crisis.

Known as Dr Copper due to its use as a barometer of global economic health, the industrial metal fell to $5,240 a metric tonne last week, heading towards weakness last seen in the summer of 2008.

The slump in copper is a “direct consequence of the actions we are seeing in China, the increasingly flustered and desperate government [measures]”, says Alastair McCaig at IG Index.

The nation accounts for 50 per cent of global copper demand, and despite official GDP data released last week stating that growth has confounded expectations to hit seven per cent in the second quarter, the figures have been widely ridiculed.

A range of other indicators show China is struggling. Not only is the debt-laden country going through a difficult transition from infrastructure-led growth to a consumption-led economy, but a stock market bubble has recently burst and $3 trillion (£1.9 trillion) has been wiped off the value of local shares. Authorities have taken a heavy-handed approach, banning the sale of some stocks for six months and going after short sellers.

“All of those [measures] independently might not be seen as too much of an issue but bundle them all together and we are seeing increasingly nervous oversight of the Chinese economy,” McCaig says.

DEFLATION
Looking ahead, the ongoing weakness in oil is likely to spell deflation for Western economies. Black gold plays a large part in dictating inflation levels in the West. The last round of inflation data — showing the UK had zero consumer price inflation — was correlated before the latest squeeze on oil prices kicked in.

“The latest fall in oil prices will push many economies including the UK into deflation in the next month or two,” says Michael Pearce at Capital Economics.

DELAYING RATE HIKES
Now experts suggest planned interest rate hikes could be delayed. “The UK is already skirting with deflation in the next couple of months and that is going to keep the Bank of England sitting on its hands,” says Neil Williams at Hermes Investment Management.

Consensus in the market is for the first US rate hikes to appear in December, with the UK set to follow suit early next year. But dozens of central banks have been forced to ease policy so far this year, painting a weak global picture. “The US and UK are talking of raising rates but with 30 banks having cut rates, the way things are going those numbers are likely to increase,” says McCaig.

Q: Why did it take so long for the commodities crash to penetrate the conventional wisdom?

Because it conflicted with the general theme of global economic recovery. The US was reporting lower unemployment (though a lot of analysts continued to point out the bogus nature of that stat) and Europe and Japan had begun aggressive QE programs (which always leads to more borrowing and spending, right?). So despite the occasional hiccup, 3%+ growth was a lock going forward. Consider the opening paragraphs of this July USA Today article:

The International Monetary Fund cut Thursday its projection of global economic growth in 2015 to 3.3% from 3.5% issued in April, citing sluggish conditions in the U.S. in the first quarter.

Setbacks in the U.S. – like harsh winter weather, port strikes, and downsizing in the energy sector – have contributed to slower growth worldwide, it said in its latest “World Economic Outlook” update.

While the rest of the world should pick up pace by next year, advanced economies like Germany could make headway faster than developing nations, it said.

Growth of 3.3% is not bad at all, and it remains the consensus forecast for 2016. This implies fairly robust demand for commodities, so the fact that their prices are declining was easy to dismiss as an aberration soon to be rectified by rising sales.

Q: Can there be growth, inflation and all the other good things that governments have been promising while raw materials prices are tanking?

The answer is probably no, which means the other numbers — GDP, deficits, interest rates — will have to be adjusted to conform with the commodities complex rather than the other way around.

Which in turn means that the world’s governments are about to panic. Expect some Hail Marys in 2016, including sharply negative interest rates, a serious war on cash to facilitate those negative rates, and a return to QE in the US, where the idea of raising interest rates will be quickly abandoned.

Since these policies are just more aggressive versions of what has already failed, they’re unlikely to stop the carnage, leaving the developed world with one final weapon against global deflation: a coordinated devaluation of all major currencies, probably against gold. Though it’s taking a really long time, the currency war continues to play out according to Jim Rickards’ script.