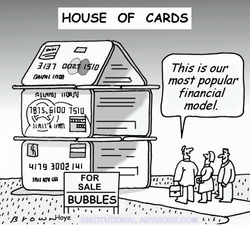 As we have noted, in the credit markets, the term “Disorderly” is a euphemism for “Crash”. And this is the condition afflicting most classes of bonds.

The key event has been the reversal from a speculative surge to a downtrend. This was expected in or around May.

Using the High-Yield Corporate Bond (HYG), the price soared to 95.80 on May 7th, which was followed by a dramatic Outside Reversal day. We reviewed this with Bond Markets – A Profound Change? on May 13th.

The main point was that the hot action was vulnerable to a seasonal reversal centered in May, and that market forces would overwhelm bond-buying programs by the ECB, BoJ and Fed. Mother Nature and Mister Market would preempt the “official” decision by senior central banks to end the program.

The test of the high reached 95.39 on May 22nd, and the breakdown was accomplished on May 23rd. Technically, the trend reversed to down in price and up in yield. The possibility of widening credit spreads has yet to work out. Treasury bond prices have fallen with lower-grade bond prices.

At some point spreads between treasuries and corporates will turn to serious widening.

The other part of the Great Bond Revulsion will be a serious increase in interest rates relative to the rate of CPI inflation. Rising real interest rates is one of the features of the post-bubble condition and will be reviewed in the next week or so.

The last disorderly market brewed up last summer and was mainly focused upon European Sovereign Debt. Using the Spanish Ten-Year as the proxy, the reversal from party-time was accomplished in early April 2012 when the yield rose above 5.50%.

However, in looking at the leading disasters such as HYG and Emerging Debt (EMB) the plunge has been severe. Severe enough to drive the Weekly RSI on the HYG to 33, which is the lowest since the 2008 Crash.

On the EMB the RSI is down to 18. While not as low as with the 2008 Crash, it is extremely oversold.

The action in US corporates has been very bad but “Emerging” has been worse. The yield ratio between EMB/HYG soared to 1.36 last November and then HYG began to outperform.

Over the past week the calamity drove the DX from 80.5 to 82.8 earlier today.

– Lower-grade bond markets are extremely oversold and can enjoy a brief rally. There could be even greater liquidity problems in the fall.

– With this, the US dollar can decline.

– A technical rebound for the precious metals is possible.

The term “Rational Fringe” has been used to distinguish our research from the mainstream convictions that financial history was random and could be managed by inspired manipulation of interest rates.

Our models are based upon a thorough review of the highly volatile conclusions of 5 previous new financial eras. This provides forecasts of significant trend changes with enough lead time to formulate strategy. See our notes on the Capitulation Model.

Our original observations were that key financial sectors such as the stock market or the yield curve each recorded similar behaviour patterns through each previous era of great financial booms.

The conclusion was that these patterns would provide a guide through our wild financial party and that the action would override orthodox financial research and policy making.

….read more about the service HERE